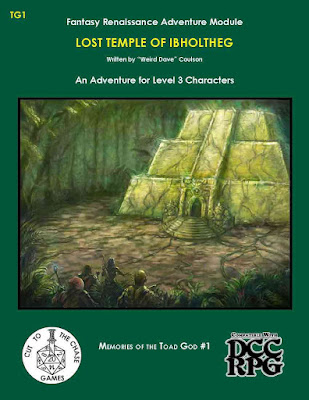 TG1: Lost Temple of Ibholtheg is a 3rd level adventure written by "Weird Dave" Coulson. Art is by Matt Morrow and Johnathan L. Bingham. Cartography is by Glynn Seal. The publisher is Cut to the Chase Games.

This adventure is the second part of the Memories of the Toad God series, following Depths of the Croaking Grotto. As with other adventures in this series, Lost Temple of Ibholtheg is simultaneously available for Swords & Wizardry, Pathfinder, Castles & Crusades, and 5th Edition Dungeons & Dragons.

This adventure, like its predecessor, could be worked into the mythos of Bobugbubilz, Schaphiroadaz, and  Tsathoggua, allowing the judge to link it to The Croaking Fane, The
Weird Worm-Ways of Saturn, and The Vault of Ash, if desired. The Toadlock, from Spellburn's Dungeon Denizens, is another good potential fit.

One interesting feature is the use of shadow orcs not as opponents, but as guides and sources of information. It is unfortunate that the text refers to "a series of Personality checks" to avoid gaining faux pas point, reducing interplay to a series of rolls, but the judge can easily ignore that. That the only exampled check is in the nature of a saving throw to avoid making a social blunder could also guide the judge into considering the checks to be second chances.

Weird Dave’s Notebook continues to be a good feature of these modules, as it is always interesting to read the thoughts of another game designer and/or judge.

The adventure does suffer slightly from being written and released for multiple formats, and specifically because most of the other formats are far more codified than Dungeon Crawl Classics. As a result, you'll find references to falling under the effects of a Confusion spell, for instance. The magical scimitar, Toad Caller, is not a generic magic sword, which is nice, but the judge will have to determine the base damage for a scimitar (I suggest 1d7). Overall, though, these lapses are pretty rare.

Most importantly, there are plenty of non-generic monsters here, as befits Appendix N gaming. Yes, you are in the jungle, so you are going to get snakes and big apes. I really liked the description of the Idol of the Squamous Toad, and the ending of the adventure is appropriately dramatic. Also, of course, giant toads and choruses of batrachian critters have a long standing not only in the game itself, but in the literature that inspired it as well.

There is plenty of room for expansion on the jungle trek to and from the Lost Temple. Several appropriate encounters are described for this journey, but there is no map provided, and the judge could sprinkle his own campaign milieu with mini-sites and lairs to increase the options and mysteries of the Great Jungle.

The next two adventures, Tongues of the Screaming Toad and Shadow out of Sapphire Lake, are both designed for 3rd level characters, so the author has taken into account the rate of progression in Dungeon Crawl Classics. You can easily go from one to the next without requiring additional material, but you may wish to explore and customize the setting anyway.The ruined civilization of the Xilonoc, at the very least, deserves more detail! Indeed, a mini-gazetteer of Kraden’s Hill and the area around it would be welcome.

If these adventures are ever compiled into a single volume, I would love to see monster statistics printed in the text. Having to flip back and forth may make sense for games where there are very large statblocks, but should not be a requirement for Dungeon Crawl Classics adventures. The idea of a compiled index is, nevertheless, a good one. A full patron write-up for Ibholtheg, the Squamous Toad, would be a definite bonus in a compiled version.

On the borders of the uncivilized Great Jungle lies the outpost of Kraden’s Hill. Brave adventurers are needed to lead expeditions into the perilous jungle, facing cannibal monsters, dangerous flora, and worse, all in search of wealth and power hidden deep inside the jungle. Find this and more in the LOST TEMPLE OF IBHOLTHEG!