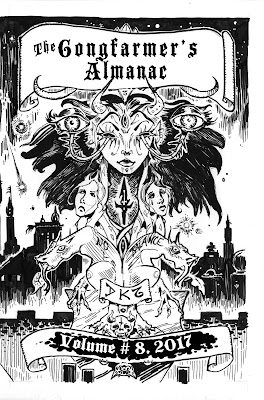 The 2017 Gongfarmer’s Almanac Volume 8: 2017 Master Zine Index, was written by Jon Hershberger. Artwork is by Doug Kovacs, Marc Radle, William McAusland, and Maciej Zagorski. The publisher is the Gongfarmer's Local #282.

Unlike previous years' Gongfarmer's Almanacs, five volumes of the 2017 edition have an overarching theme - the roiling, ever-changing plane of Pandemonium. Volume 8 does not follow this theme, but rather contains a Master Index of the contents of existing DCC RPG-related zines, similar to what we've seen in previous years.

We are, as a community, extremely lucky to have Jon Hershberger, who is not only one of the driving forces behind the Gongfarmer's Almanac, but who has, for years now, helped us keep track of what is in the smaller publications. The author writes:

"The number of ‘zines currently available stands at thirteen, and includes the following: Black Powder Black Magic, The Cities of Zorathi, CRAWL!, Crawling Under a Broken Moon, Crawljammer, D.A.M.N.!, Dungeon Lord, The Metal Gods of Ur-Hadad, Myassari, Prayers of the Forgotten, Sanctum Secorum, the 2016 Doug Kovacs Sketch Book, and The Gongfarmer’s Almanac itself!"

I do have some questions about that. Why, for instance, is a product like Myassari or Prayers of the Forgotten, both of which are intended as far as I can tell as a one-shot product, listed as a zine, but Vault of the Dragonslayer and The Phlogiston Books are not? Why is the 2016 Doug Kovacs Sketch Book included but not The Devil's Chapbook or Scrivener of Strange Wor(l)ds? I am guessing that this is an artifact of the Index being a one-man project. Really, there's only so much one can do. It also suggests that, if you are making a zine, you should perhaps let Jon Hershberger know...possibly even create a list of index entries for him.

A few minor errors have crept in. Paul Wolfe's "Reptile Ghuls" from D.A.M.N. #1 are listed as "Reptile Ghouls", for instance, and the Magic Wand spell I wrote for Crawl #3 is listed under Magic Items rather than Rituals & Spells.

Still, these are (at best) minor quibbles when you consider the massive, unpaid, undertaking that Jon Hershberger has provided the community. Consider this rather a call to other publishers: Lighten the load by providing entries that only need to be collated into the Master Index. Perhaps consider providing a complimentary copy to Mr. Hershberger as well, because when someone is looking for chainsaw stats, information on Zin’s Wizard Staff, or wants to learn more about Clara the Demon Chicken, they will be checking this index, and it may well drive sales your way!