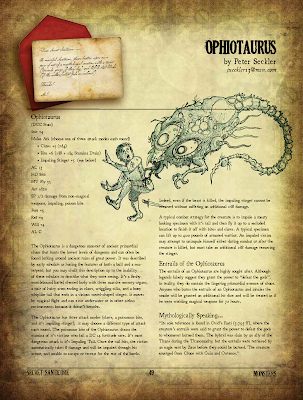 So, what is Secret Santicore?

According to the Secret Santicore website: "Every year around this time, precious little gamemasters of all ages from around the world write Santicore asking for a piece of gameable content. But because Santicore is a busy abomination, he orders his minions to mix up all those wishes and send them all back.

Little DM Bobby and Judge Susie must write or draw their very best response to the wish in their stocking or Santicore will come eat them up.  You would think this discourages anyone from writing Santicore, but every year the mailbag is bigger! All the entries are then published in a free, non-commercial PDF for all to use!"

This volume contains no content explicitly for Dungeon Crawl Classics.

Ophiotaurus: "Dear Secret Santicore—Oh merciful Santicore, please bestow upon me a piece of art of a mythological creature with a twist (towards gonzo, if they dig) and OSR stat blocks (if the author/artist feels so inclined). Thanks! M.E."

Author Peter Seckler's Ophiotaurus "is a dangerous monster of ancient primordial chaos that hunts the lowest levels of dungeons and can often be found lurking around ancient ruins of great power. It was described by early scholars as having the features of both a bull and a sea-serpent, but you may chalk this description up to the inability of these scholars to describe what they were seeing."  Its entrails are useful for making one a temporarily more powerful war.

The creature appears in Ovid's Fasti. For another version of this creature, see D.A.M.N. Magazine #1 - Winter 2017.

The Lonely Heir: "Dear Secret Santicore—I would like to see  a writeup for some alternate PC races in Dungeon Crawl Classics (could double as B/X or Cyclopedia D&D.) Sorry that is so specific.. in DCC, your race is your class. Thanks! P. S."

Enter Paul Wolfe, who writes: "Many of H.P. Lovecraft’s protagonists were of similar mien: Lonely young men bequeathed some arcane artifact by a dead relative. And they followed similar paths: to be the teller of morbid tales of obsession, a quest for otherworldly power, and ultimately, of descent into madness at the hands of that otherworldly power. And, strangely, they always seemed get their closest friends killed. The most famous of these protagonists was Randolph Carter, who appeared in seven of Lovecraft’s stories and was believed to be a somewhat autobiographical character. The trajectory of Randolph Carter is familiar to many players who run wizards in DCC RPG: It all ends in pain.

You are the lonely heir. Pampered and overeducated, your life has been a bubble where all of your basic needs and most of your desires are fulfilled without you having to lift a finger. In this environment, boredom and ennui have driven you to knowledge considered anathema among your family, friends and colleagues. Digging through ancient texts and deciphering arcane knowledge has  led you to lonely and haunted locales. Your association with persons considered untouchable by your upper crust associates has led you even farther afield, testing intoxicants, charms and incantations that could lead you to ultimate power or doom your very soul. Through it all, you manage to attract one devoted friend who follows you to the most damnable of places, defends you from the denizens that lurk there and often lends you the only courage that you’ve ever known."

The class as described includes a unique 1st level spell (attract friend) to determine what sort of "friend" your lonely heir gains. This is similar, in some ways, to a familiar. The friend may be a protector, a scholar, a sorcerer, or an alien. The class also contains information on "psychic events" that can happen when the lonely heir encounters powerful supernatural beings.

The author writes: "The class is based on an amalgam of protagonists from HP Lovecraft’s many stories (most notably, Randolph Carter). This is the first in a series of classes based on an archetype from an Appendix N author that I will make available on my blog in the coming weeks. Planned entries are from Jack Vance’s Planet of Adventure, Edgar Rice Burroughs various planetary romances, Andre Norton’s Witch World, Manly Wade Wellman’s Hok the Mighty, Howard’s Almuric, and even a strange one from Tolkien." Hopefully some of these will some day come to light!

Fort Delirium: "Dear Secret Santicore—A keyed map for a colonial fort/village. New world America style, though not necessarily that time period. This will be home base for a DCC game, so the more I can point at the map and say, “ You. Gravedigger. You live here” the better.” Also it can be wacky/gonzo, but doesn’t have to be.Thanks! N.M."

A system neutral map and key are provided, courtesy of Christopher Wood.

This volume contains no content explicitly for Dungeon Crawl Classics.