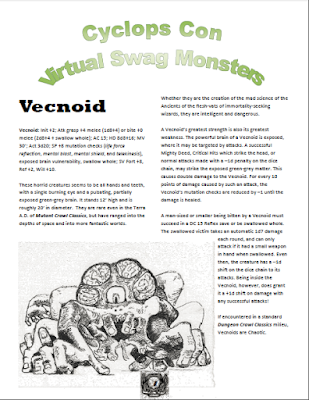 Disclaimer: I am the author and publisher.

For Cyclops Con, I was able to commission four illustrations of cyclopean creatures from Elias Scorsone, who is a regular player in my games. As a point of fact, the descriptions proceed from the illustrations, not the other way around! If it were not for the artist, no PC would ever have been plagued by Floating-Eye Phil, which I sincerely hope has happened in your games.

The four beings are:

Vecnoid: These horrid creatures seems to be all hands and teeth, with a single burning eye and a pulsating, partially exposed green‐grey brain. It stands 12’ high and is roughly 20’ in diameter.  They are rare even in the Terra A.D. of Mutant Crawl Classics, but have ranged into the depths of space and into more fantastic worlds.

Whether they are the creation of the mad science of the Ancients of the flesh‐vats of immortality‐seeking wizards, they are intelligent and dangerous.

Floating-Eye Phil: Monsters don’t follow the rules in Dungeon Crawl Classics, and neither do NPC spellcasters. Floating‐Eye Phil is an alien wizard hailing from a distant star, who travels the planes in search of something he calls “the transdimensional box of azure hue,” and the chirurgeon who travels within it, to treat his contra‐temporal rash.

Slugclops: This disgusting creature is something like a massive quadruped slug with a single eye on a long stalk. Its mouth opens up on its back, unfolding like a flower...and then the tentacles lash out!

Mordant: The primal cyclops known as Mordant traffics with ghosts primarily when he creates them. Truly, Mordant follows the philosophy of “slay first and question later”. Like other cyclopses, his eyesight extends onto multiple planes of existence, but his sight includes seeing into potential futures, which is represented by a higher initiative and Reflex save bonus than a creature of his size could usually obtain.

Mordant can also see into the astral and ethereal planes, invisible creatures, and the true nature of illusions, as do his lesser kin. Mordant needs no sack of variegated eyeballs to perform these tricks!

Although a known man‐eater of legendary hunger equal to his vast proportions, Mordant’s island keep is still sought out by adventurous wayfarers. Some of these seek the answers to questions, or lost spell knowledge. Still others wish to have lost vitality returned to them.