Advent of the Avalanche Lords 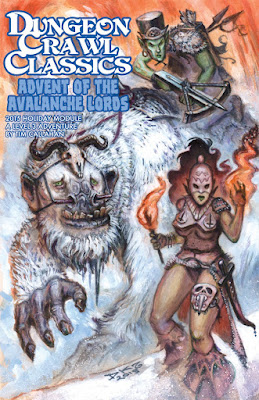 Written by Tim Callahan, this adventure is one of a series of holiday-inspired outings published by Goodman Games.  The adventure includes role-playing (urban) elements, a wilderness trek, and a unique “dungeon” at the climax. As this is the most recent Goodman Games Yuletide adventure, the less said about it, the better. You will want your players to experience it without foreknowledge. The important thing is that this is a cool little adventure, even without the holiday elements taken into consideration.

The digest-sized module also includes a partial patron write-up for Father Frost. If you are using a setting like Michael Curtis’ Forlorn North, there are creatures in this adventure that you may wish to use in other, less seasonal, adventures. There is plenty of flavorful material. Between the adventure itself, and the re-usable stuff, it is a great value for its price.

I have not yet had a chance to play through this adventure, but I look forward to doing so at some point.

Posted by ravencrowking at 08:47 No comments:

A Gathering of the Marked 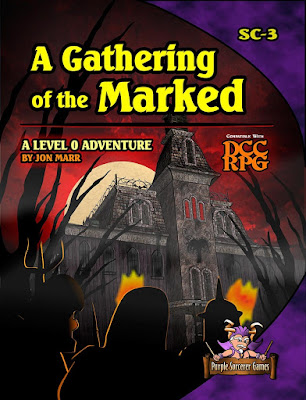 This is the third Sunken City adventure written by Jon Marr for Purple Sorcerer Games.  This is a 0-level funnel, which means it has to answer the most important question of all: Why are your characters adventurers? Think about it. The game world is filled with parsnip farmers and merchants, but something sets your PCs apart from the run-of-the-mill herdsmen and ditch diggers. What is it?

Consider. This could be an event. It could be an opportunity. It could be a situation that changes everything forever…like waking up one morning cursed with an evil mark that drives you away from civilization and into the ruins of the Sunken City…

Another thing that comes up often in discussions of the Dungeon Crawl Classics game is working the machinations of various patrons and/or gods into actual game play. Doing so, and doing so well, is a hallmark of Jon Marr’s work. This is certainly the case in A Gathering of the Marked, where both a demon and a patron vie, using the PCs as their pawns to meet differing goals.

This adventure is filled with fun and creepy material. It contains two of the best magic items to appear in a Dungeon Crawl Classics adventure: Master Shock and The Manual of the Swordsman. Both items offer real benefits, but neither is a cure-all, and there may be consequences for the benefits received!

As is normal for Purple Sorcerer, the company web site contains many printable extras – including maps and paper minis – to help you present the adventure to your players. All in all, it is excellent value for the money…but unless you are a completest you should consider investing in The Sunken City Adventure Omnibus & Guide, which I will eventually get to in this blog.

(Disclosure: I have a “Thanks” credit as a proofreader in the Omnibus.)

It should be noted that all Sunken City adventures have a distinctive artistic style. I have described it as “South Park meets H.P. Lovecraft” – images that are often both funny and disturbing. The illustrations are very different from those you would find in a Goodman Games product, for example. Purple Sorcerer is good enough to make them printable on their website, allowing the prospective judge to use them as player handouts.

I ran this adventure for a group which had tackled several Dungeon Crawl Classics funnels before, and they did very well in it. They were able to maximize their chances by using their brains to reduce how often they had to use their dice. They still experienced the usual attrition…but not necessarily where I had thought it most likely. They were engaged and had fun, which is always the best metric for any adventure.

Get It Here
Posted by ravencrowking at 17:12 No comments: