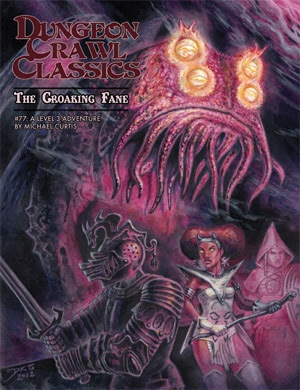 The Croaking Fane was written by Michael Curtis and published by Goodman Games. It is a 3rd level adventure.

Which Lord of Evil Amphibians gets to be top frog? This adventure deals with the machinations of two powerful supernatural entities, the patron-god Bobugbubilz and his rival/progenitor Schaphiroadaz. The followers of Schaphiroadaz have disappeared, leaving their fanes apparently deserted. Who knows what wealth may lie within? Who knows what dangers? If one of your PCs is a cleric of Bobugbibilz, or has the Toad-Fiend for a patron, the patron-god reaches out to his followers, demanding that anthing within the nearest such temple be put to the sword. The adventure also includes a new 2nd level Cleric spell, but you have to follow Schaphiroadaz to cast it.

This is a strong, and strongly themed, adventure, which somehow fails to get the love it deserves. PCs can certainly add to their wealth, and bad things can certainly happen to you. There is a table to determine how badly mutilated you are if you encounter flesh-eating tadpoles, for instance. The added background to Bobugbubilz is also cool, and described appropriately. The adventure certainly offers challenge.

This adventure does suffer from a lack of flash. There is no iconic moment in which the scenario swings in an unexpected direction. There is no difficult choice that the players have to grapple with, deciding what they are willing to sacrifice or how much they are willing to risk to grab the treasure as the area collapses. An extended version of this adventure would also benefit from a patron write-up for Schaphiroadaz.

In addition, it is easy for a new adventure to get lost in what has come out already dealing with amphibious menaces.

Evil amphibians, of course, have a long history both in Appendix N fiction and in gaming. There is a great scene in Hiero's Journey (by Sterling Lanier), where the protagonists are surrounded by frogs and froggy humanoids. Likewise, writers like Clark Ashton Smith and H. P. Lovecraft have made great use of frogs and toads as background elements. The Winged Toad described by Michael Curtis in this adventure may well have its genesis in the Cthulhu Mythos deity, Tsathoggua.

In gaming, of course, there is the iconic Temple of the Frog by Dave Arneson and David Ritchie, Gary Gygax's lethal encounter outside the ruined moathouse in The Village of Hommlet, the froghemoth from Expedition to the Barrier Peaks (also Gary Gygax), and the bullywug faction of David Cook's Dwellers of the Forbidden City. Greyhawk had Wastri, the Hopping Prophet. In addition to bullywugs, Dungeons & Dragons gave us grippli and the slaadi. I am sure that I have forgotten more examples than I have listed, and I have probably forgotten the reader's favorite, most iconic amphibian moment form the early days of role-playing games.

Nonetheless, The Croaking Fane is a good, solid adventure, which deals with its themes and subject matter well. It is also an adventure which demonstrates how dealing with patrons and gods may affect the PCs. This is not gonzo in the way that, say, Michael Curtis' Frozen in Time or my own The Dread God Al-Khazadar is gonzo, but it could have long term ramifications in the judge's game milieu should the PCs fail and Schaphiroadaz cosmically ascend. Finally, it is contrast with a solid, moody piece like this that makes the more gonzo adventures seem so gonzo.

Solid, but not gonzo. A classic theme handled well.

Posted by ravencrowking at 15:36 No comments: