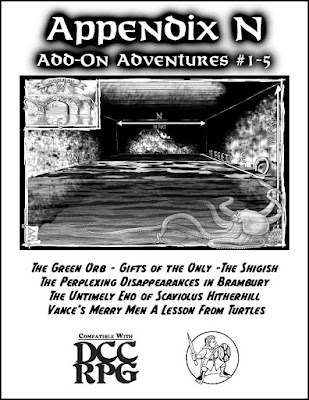 This product is actually a series of short scenarios for Dungeoon Crawl Classics. The bundle contains:


And, yes, my name came up four times, so keep that in mind as I discuss the product. These are also very short individual pieces, so avoiding excessive spoilers requires keeping discussion to a minimum. With no further ado:

The Green Orb by Salvatore Macri and John Adams.

Described as an "adventure", this is really an encounter that has ramifications, and is best used as a complication during another quest.

Gifts of the Only, by Daniel Bishop.

Again, although described as an "adventure", I used this as an encounter between two adventure sites. It is also a great "Quest For It" location. Finally, published in 2013, this is the first published material that takes direct inspiration from Manly Wade Welman's "John the Balladeer" stories, a year before The Chained Coffin. If you are running a campaign in the Shudder Mountains, you might want to take a look. (There is a reference to those stories earlier, in In the Prison of the Squid Sorcerer.)

The Perplexing Disappearances in Brambury, by John Adams with Daniel J. Bishop.

A (very) small funnel that could become part of a larger campaign, I became involved when asked to do an editing pass, but was unable to resist adding a Cthulhu element. This could also work as a small side-adventure for low-level characters. I believe that it was inspired by the map of Deepwatch in the "Maps of Mystery" column in Dungeon Magazine, although I don't know that with certainty.

A ghostly encounter by Dungeon Crawl Classics luminary Michael Curtis. This could also be fit easily into a Shudder Mountains campaign, although there is no direct Manly Wade Wellman reference that I can see.

The title should tell you which Appendix N author was the inspiration for this encounter...I was specifically inspired by the Lyonesse trilogy here. No magic. No monsters. Just a typically Vancian event as people try to take advantage of other people. The characters are named for the "actors" in William Shakespeare's A Midsummer Night's Dream.

A Lesson From Turtles, by Daniel J. Bishop.

Having heard rumors of a source of arcane knowledge, what wizard can resist? Another short bit of "Quest For It" material usable in most campaign milieus.

The Shigish, by John Adams.

A write-up for dangerous other-dimensional creatures.


Get It Here
Posted by ravencrowking at 06:31