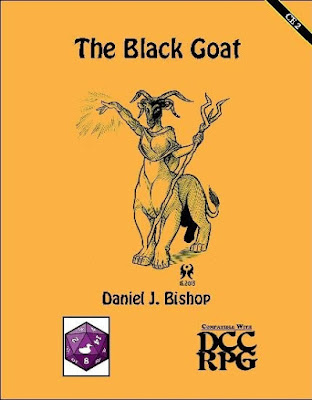 I wrote The Black Goat for Purple Duck Games. It is the second of the "Campaign Element" series, intended to provide recurrent material that can be included in an ongoing campaign with a minimal amount of fuss. In addition, the CE Series was intended to make it easier for the prospective judge to deal with "Quest For It" moments in game.

When I became aware of the need for preset pieces like this in my home campaign, I contacted Tim Hartin of Paratime Design and asked what he would charge for 15 small maps, each from 5 to 10 encounter areas, designed as he chose. (There is an exception to "designed as he chose", which I will get to when this blog reaches Silent Nightfall.)

Because I intended on turning these maps into completed products, and I intended to sell them to Purple Duck, I asked the Duck's Mark Gedak about pricing for the maps. For obvious reasons, I wished to be able to recover my investment when the products were finished. It should be remembered that, at this time, I had only three published adventures under my belt, all of them through Purple Duck, and all of them using existing cartography. I was pleasantly surprised when Mark Gedak offered to pay for the maps upfront, and to publish the CE Series as it was completed. At the time of this writing, six of these products have seen the light of day.

The Black Goat does the following for the judge:

1. It provides interest when travelling from point A to point B.

2. It provides a potential patron for elves and wizards.

3. It provides the judge with the means to put information into the players' hands.

4. It provides the players with the means to seek information. This is not the same thing as item 3, above. Item 3 allows the judge to foreshadow and lay hooks for possible adventures. When the players get to ask, they tell the judge precisely what they wish to discover.

5. It provides an outlet to take precious treasures from PCs without the players feeling (or being) ripped off.

6. It provides a treasure for master thieves to plunder...if they can.

7. It provides a new spell, which creates magical silence.

Like other entries in the CE Series, The Black Goat is not intended to be a "fire and forget" dungeon crawl. It is best used as an ongoing location, a resource for player and judge alike.

Get It Here
Posted by ravencrowking at 06:44