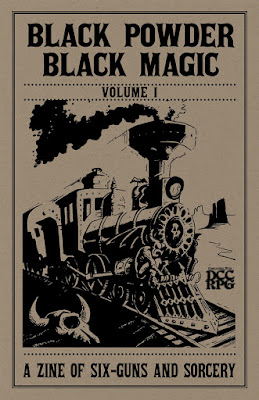 Black Powder, Black Magic Volume 1 (a zine of six-guns and sorcery) was written by Carl Bussler and Eric Hoffman for Stormlord Publishing.  It is the first volume in a series bringing Weird Western fiction to the Dungeon Crawl Classics multiverse.  The authors wisely choose to make the first volume about introducing the setting – largely through introducing the zero-level schlubs who will seek their fortunes in Brimstone, and then giving them a chance to do so.

It should be noted that this is not the historical Wild West, but rather an altered version where the Dark Territories of the United States of America form the primary arena for play. A map on page 3 shows the relationship between the States, the Dark Territories, the Native Nations of the Navajo and the Lakota, and the Republic of California. The year is 1880.

The product is broken into several sections.

This is a nice bit of fiction that the judge can read aloud to the players, and which prompts several steps in the creation of newly-minted 0-level adventurers. For obvious reasons, it references later sections in the zine. It also adds a nice bit of flavor, bringing the setting to life in a way that no textbook-style entry could.

A listing of major events from the start of the California Gold Rush in 1848 to the Southern Dakota Railroad being completed in 1880. The events chosen are significant, but the details are left for the judge to fill in.

Starting at the Bottom

Rules for creating 0-level characters suitable for Brimstone and other regions in the Weird Western setting. This includes sections for appropriate Occupations, Tokens of the Past, Motivations for Heading West, and Common Names in Brimstone.  Tokens of the Past replace random equipment, and include items like a ticket to the Ford Theater and a human scalp. Motivations for Heading West give your starting PCs reasons for leaving the greener lands to the East. Common names prevent a gaggle of PCs called Conan or Elric taking away the feel of the setting. They are also an excellent resource for the judge when naming NPCs.

You can hardly run a Western setting without rules for pistols, rifles, and shotguns. Volume 1 includes all of these, as well as cannons, Gatling guns, and even elephant guns. This section includes information about firearms manufacturers and a Mighty Deed of Arms for fanning the hammer of a revolver.

In the Weird West of Brimstone, a ritual called The Soul Rending resulted in a new twist in the wars of Hell: A demon slain on its home plan explodes upward in a scatter of metal fragments that finds its way into mortal realms. Depending upon its quality, the ore can be used for various purposes, and all of it is valuable.

A level-0 funnel by Eric Hoffman, which is more than suitable for the setting. This also includes The Red Duke, a potential patron who is not developed in this volume.

A spot of fiction by Carl Bussler which takes place in 1878 (according to the Timeline of Events on page 3). This short bit of Weird Western fiction puts the events in The Devil’s Cauldron into their proper perspective…the judge may wish to read it aloud after the adventure is done. Since the issue starts with a pit of fiction in the form of the Introduction, this is a fitting conclusion to the first volume.