The Carnival of the Damned 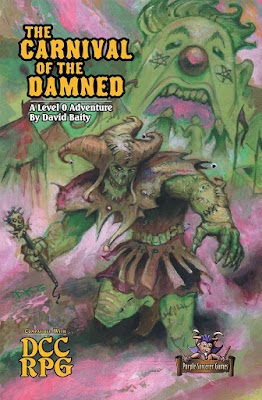 The Carnival of the Damned was written by David Baity and published by Purple Sorcerer Games.

Disclosure: I received a proofreading credit on this product.

This is, to put it quite simply, the meatiest 0-level funnel written for the Dungeon Crawl Classics system to date. Not only is there a main book, which is over 140 pages long, but there is a pdf containing printable images, paper miniatures, and patron spell printouts for Gelos, a complete patron written for the module.

According to the adventure,

Gelos is the god of laughter and madness; his followers are the insane and those who find humor in dark deeds. Gelos feeds on the emotional energy from laughter of all types, from the laughter of a child playing with a new pet to the twisted cackle of a murderer who finds sadistic glee in practicing his murderous art. The Laughing God often reaches out to those forgotten in dank dungeons and sanitariums, finding their chaos-filled souls a delicious feast for the taking through twisted bargains.

The prospective judge can easily see how this patron would be useful not only in the adventure presented, but in long-term campaign play.

The adventure takes place within a carnival. The carnival includes 28 fully described encounter locations, such as the Tattoo Parlor and the Bone Coaster, as well as 12 random encounters, all of which are appropriate to the setting. The judge may select attractions from those listed, and has the means to close off areas of the carnival, so that even players who have already experienced The Carnival of the Damned can enjoy a second – or even a third – play-through.

It should be noted that this is not simply a bunch of themed encounters slapped together – there is a compelling story behind the carnival’s appearance. By the time the PCs encounter the Black Jester, they may actual feel sympathy towards him.

A band of villagers are trapped in a mist-shrouded carnival in the dead of night, facing death at every turn. Can they survive twisted oddities like the corpse-filled Tunnel of Love and the dreaded Bone Coaster?

Filled with fantastic art, the Carnival of the Damned unleashes nightmares into any campaign, with encounters refined and polished by the anguished screams of hundreds of players at conventions like Dragon Con and Gary Con!

For judges, the adventure fills many needs: author David Baity has crafted over 30 encounters and dozens of random threats. There is enough content for days of tournament play, or judges can select a smaller collection of favorite dangers for a quick DCC funnel session. For sandbox-style play, judges can extract individual encounters whenever a twisted challenge is needed in any old school system. There's even a haunting backstory for those looking to integrate the adventure into an extended campaign.

And there’s clowns. Lots and lots of clowns.