Caves of the Kobold Queen 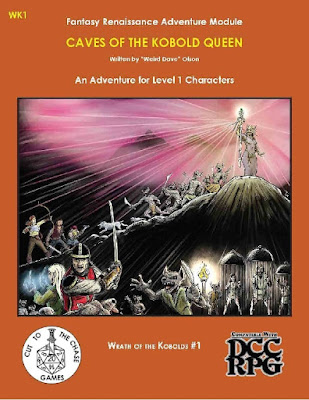 And now I turn with a sad heart to Caves of the Kobold Queen by "Weird Dave" Olson and published by Cut to the Chase Games. This adventure was part of a kickstarter campaign that includes Pathfinder, 5th Edition Dungeons & Dragons, and Swords & Wizardry versions, as well as the Dungeon Crawl Classics version.

This was probably a decent adventure for its original rule set, but the conversion to Dungeon Crawl Classics is lazy at best. From a town of 250 people offering a reward of 100 gp per adventurer (Cut to the Chase could have made this sp without having to make any other change) to a calls for social interaction and Charisma checks to resolve role-playing (and DCC doesn't have Charisma as a stat), there is a lot the prospective judge will have to fix in order to use this adventure.

The town of Ormkirk (which is an excellent name, by the way) has a 6th level cleric. a 1-in-50,000 supra-mortal accomplishment in the DCC rules. Why not simply use the friar stats provided in the core rulebook? Why is this ulta-powerful NPC there? The obvious answer is that the person who did the conversion didn't "get" Dungeon Crawl Classics.

Monsters are ho-hum, with none of the Make Monsters Mysterious suggestions given by the core rules, beyond a table of random physical traits for kobolds.

At one point, an entire dungeon level is resolved by skill checks. It is entirely possible to create a non-mapped space in DCC that needs to be resolved by player cunning and PC skill - Harley Stroh did this extremely well in both Peril on the Purple Planet and The Lost City of Barako. In Caves of the Kobold Queen, a chart of area descriptions, as well as the chart of encounters, would have gone a long way to resolving this problem.

Also, while an appendix of statistics is a useful addition to an adventure, I hate it when the statblocks are not included for encounters in the adventure text. This makes sense in games like Pathfinder, where the stats would easily take up a full page, but it is inexcusable in Dungeon Crawl Classics.

With sufficient work, this could be a fun adventure, but the judge is warned that some work will be required:

(1) Examine all rewards, and alter where necessary. The adventure assumes magic items are standardized; this should not be true in Dungeon Crawl Classics.

(2) Make Monsters Mysterious! The adventure assumes that the townsfolk know what the kobolds are, but that doesn't mean that the PCs must. Still, if you want to use the full WK series, you might wish to assume that the kobolds are a roughly known quantity, and add some unexpected monsters to the Talon Hills. Also, the black bear in Area 6 of the Ambush Cave could be something far more interesting, even if you use the same statistics.

(3) Especially, devise an additional chart to describe areas of the middle level of the kobold caves. Consider using the dice chain instead of fiddly modifiers for the skill checks. The base die should be linked to occupation, so that dwarves and miners make the check with 1d20, for instance.

(4) If you are going to continue with the series, you will want a gnome class, such as the one in Crawl! fanzine #6. If you are not going to continue, you may wish to alter any mention of gnomes. Or not. Their language is listed in Appendix L, after all.

(5) If you wish to continue with the series, the death throes (curse) of the Kobold Queen are important. Don't skimp on them. In fact, I would say they are not enough.

(6) "Weird Dave" Olson tells you repeatedly that it is okay to fudge. I believe that the adventure will be better if you do not. As far as fudging the sacrifice timing goes, perhaps I missed the specified timing the judge might fudge. I would come up with a time table, based on when the PCs first reach the kobold caves, and then stick to it! If the PCs dawdle, the results are on them.

In the wild and rocky hills north of the town of Ormkirk, dangerous kobold raiding parties have been striking at travelers and townsfolk alike for several weeks, stealing them away under cover of night from out of their homes. Desperate for help in rescuing the missing people, Ormkirk’s townmaster sent out a call for adventurers to hunt down the raiders and recover the kidnapped men.