Crawling Under a Broken Moon #16 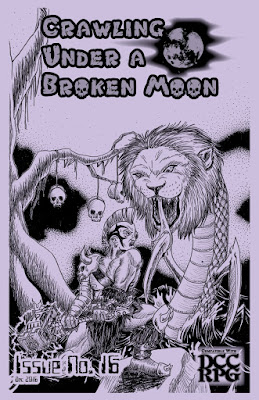 Crawling Under a Broken Moon #16 was written by Reid San Filippo, Kevin Searle, Jon Carnes, Sean Ellis, Anna Costa (with ideas from Claytonian), and Quinn Coffman. Cover art is by Diogo Nogueira (front cover) and Nate Marcel (back). Interior art is by Nate Marcel, Claytonian, Matt Hildebrand, James Yoder, and Anna Costa. It is published by Shield of Faith Studios.

This issue, like Crawling Under a Broken Moon #10, offers a selection of monsters for use in your Umerican campaigns. Most of the creatures in this issue are purely post-Apocalyptic, and therefore of less use in other Dungeon Crawl Classics campaigns. That said, even a standard DCC campaign may travel to another world (for example, in Peril on the Purple Planet, Against the Atomic Overlord, or The Dread God Al-Khazadar), and these creatures may suddenly become more appropriate. A standard DCC milieu may also have had a more technological past, as in Silent Nightfall.

Taking a look inside we find:

The Black Cloud: This creature, by Kevin Searle, is a sentient cloud of pollution with a radioactive core. It seems like something out of a 1970s ecological horror movie, an episode of Thundarr the Barbarian, or a manifestation of Hate from Fritz Leiber's Lankhmar stories. Or a combination of all three.

As an aside, one of the nice things about the Crawling Under a Broken Moon monster collections is that they all come with "Adventure Hooks" that give you an idea of how to create a scenario or encounter revolving around the creatures described.

At the time of this writing, Reid San Filippo has just "appeared" on the second Glowburn podcast. Apparently, Reid is an "off the cuff" type judge, so having thought about how creatures might create scenarios would (presumably) be of benefit to him. As much more of a "prepare ahead of time" judge, this sort of information also helps me. Not every adventure hook is golden, but they are a good inclusion.

Business Revenant: The creation of Jon Carnes, this is an un-dead "project manager", often followed by a hypnotized entourage trying to complete some ages-old business plan. In fact, their goal may be nothing more than unearthing the process map for their project, lost aeons ago.

Cihuateteo: Created by Sean Ellis, this is an Aztec spirit of the dead re-written as the victims of an ancient and mystic nanovirus. If nothing else in the collection scares your players, this should be it.

Data Elemental: Humanoid shaped lines of code which can siphon data...including your knowledge and memories! This is a cool and entirely appropriate monster to be found in the ruins of Umerica.

I assume that the entries without attribution, such as this one, are the work of Reid San Filippo.

Demolishroom: Gigantic mobile mushrooms that knock down buildings and give off "shroomanoids" which help it collect (and consume) the dead. One can easily imagine an evening's gaming revolving around ending the menace....although, once deceased the danger is increased!

Frab: Take a crab-like plant and give it both a penchant for vibrations and the skills of a thief. Then give it biological grenades.

Gun Elemental: A creature from the plane of Elemental War, gun elementals are a TPK waiting to happen. Actually, they are not waiting. They are seeking out the opportunity. But, the potential to gain an armory's worth of firearms may make the PCs seek their probable deaths anyway. Their opposte number is "the Mercy Elemental native to the plane of Unending Tranquility" - making the planar cosmology of Crawling Under a Broken Moon interesting indeed.

Lion Snakes: Gigantic snakes with lion heads, these monsters would be at home in any flavor of Dungeon Crawl Classics milieu.

Organic Data MULE (Mobile Ubiquitous LAN Extension): The creation of Anna Costa (with ideas from Claytonian), this is any creature whose DNA has been encoded to contain data. The extra DNA makes them subject to additional mutations, so that all sorts of strange MULEs can be created. Tables are provided for judges to do so, but you will want to use them to springboard your own devilish ideas.

The Posse of Perception: Author Quinn Coffman offers what, to my mind, is the strangest entry in this issue. It is a cult, which grew from a gang, and each tier of the cult is focused on a single sense. This has biological repercussions.

Reindire: That Santa is an Umerican divinity was revealed in Crawling Under a Broken Moon #11. Naturally, the god of giving needs minions, right? These humanoid reindeer are just the ticket. "They will do their best to not harm anyone but their intended target, chosen by Santa, and they will NEVER harm a child by ANY direct or indirect action. They will hold to this even if it means dying repeatedly over the course of the mission." The adventure this brings to mind: The Tick Loves Santa mixed with The Preacher.

Tru-Pet: A 100% artificial pet from a parallel universe that never experienced the Cataclysm. If you want a PC to gain an animal companion which can remain viable for a long time, this is it. While this entry is not Blood from A Boy and His Dog, but it could be with very little work on the part of the judge. The PCs may never even know that their newest ally is a lab that was made in a lab.

Wraith Rider: "Empowered by an unknown spirit from the plane of Eternal Unrest after suffering a traumatic violent death, a murdered human may transform into a Wraith Rider." The obvious inspiration for this being is Marvelous, but the actual execution is its own thing. It fits in very well with the darkened highways of Umerica. Note also the additional plane added to those of the Crawling Under a Broken Moon cosmology.

Get It Here.
Posted by ravencrowking at 09:28