The Curse of the Kingspire 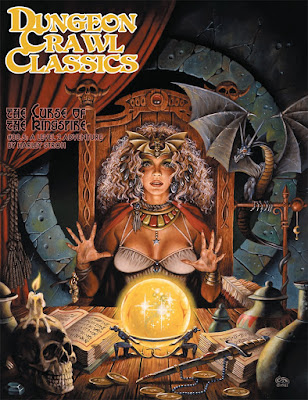 Dungeon Crawl Classics #88.5: Curse of the Kingspire, was written by Harley Stroh and published by Goodman Games. It is a 2nd level adventure, originally written for 4th Edition Dungeons & Dragons and converted to Dungeon Crawl Classics by Daniel J. Bishop. The original 4th Edition adventure was written as part of the "Master Dungeons" series published by Goodman Games.

Disclosure: I am the Daniel J. Bishop who converted this adventure from 4th Edition rules. Somewhat related to this, Terry Olson has now been added to the roster of official Goodman Games converters, with his conversion of Grimtooth's Tomb of the Warhammer by Ken St. Andre and Steve Crompton. Also, a shout-out to Goodman Games' new weekly column, Forgotten Treasure.

It is always nice being asked to do a conversion. Having done official conversions from 3rd Edition and 4th Edition Dungeons & Dragons, I find that 4th Edition requires a bit more work, but Harley Stroh's writing and vision makes it all worthwhile.

4th Edition skill challenges, in particular, need work to be translated to a less crunchy system. Many examples of skill challenges are rather banal. Stroh's skill challenges, however, actually increase the pulp adventure feel of the work...reading the original, I could very much feel the Appendix N vibe. In some ways, this adventure and its companion in the "Master Dungeons" series, Dragora's Dungeon, feel like direct antecedents of the Dungeon Crawl Classics rules. Making sure that these challenges were somehow incorporated into game play, without being a series of rolls, was important to me. I hope that I succeeded.

Statblocks are also far larger in 4th Edition, and use a scaling system altogether different from that of previous editions of Dungeons & Dragons. The focus on miniature-based combat means that creatures may have powers designed to take advantage of a grid...not always the best choice for Dungeon Crawl Classics. I tried to make the encounters feel the same, even if they do not strictly play the same.

The original adventure makes use of the Eladrin from 4th Edition, a group of elf-like fey beings with a limited power of teleportation. I wanted to make use of the sense of them, while leaving Wizard of the Coast's intellectual property behind. The result in this module are the "Elder Kith", which are called "Elder Kindred" in my own Through the Dragonwall, mostly to avoid confusion with the Kith of Peril on the Purple Planet.

There is a time travel element to the adventure that is wonderfully presented. Harley Stroh knocked it out of the park. And there is a magic sword which cannot help but remind one of Stormbringer in Michael Moorcock's Elric series. Very little work was needed to adjust this weapon for Dungeon Crawl Classics - as far as I know, Harley created the first DCC-style sword before the game existed.

Strange mists and weird lights glimmer and seethe along the banks of the Drachenvold Swamp. The folk of Kingshire have vanished like ghosts into the swamp, leaving only strange idols in their wake. At the heart of the fetid marsh, ruins of an ancient keep are all that remain of a once mighty band of rebel elder kith lords. But the ruined keep is home to a hungry curse capable of drawing the heroes back through time and space. Cast into a foreign realm of endless horror and bloodshed, it will take all your courage and cunning to end...the Curse of the Kingspire.

Get It Here
Posted by ravencrowking at 16:38