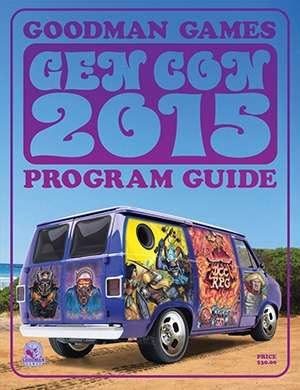 The Goodman Games Gen Con 2015 Program Book is described on RPG Now as being written and illustrated by Goodman Games, and is published by Goodman Games as well. Apart from specific adventures or articles, and self-reporting (bios, author notes, etc.), I didn't see any other attribution.

Disclosure: I wrote The Black Feather Blade for this product, and was one of the authors of The Hypercube of Myt.

This is a monster of a book. Seriously, this thing is well over 200 pages. As with other discussions of "mixed bag" type products, my focus here is going to be on Dungeon Crawl Classics material.

In this case, that's entirely necessary, or you'd need an hour or more to read this post.

Nice van on the cover. Let's look inside!

Tables For Thieves: Useful tables for any game featuring thieves, cut-throats, and other murderous rogues. Dieter Zimmerman supplies 8 Places to Have a Secret Meeting, 12 Places to Find a Hidden Key, 20 Items for Sale on the Black Market, and 14 Members of the City Watch. It says "Continued on page 152", but it is not. It is on page 154. There you get 8 Ways to Pass the Time in Prison, 10 Odd Jobs Assigned by the Thieves' Guild, and 24 Interesting Things Found in a Stolen Pouch.

Interview With Lou Zocchi: Colonel Lou Zocchi is "the original dice guy", who you might remember from the zocchihedron die. Learn more about him.

Cranking Up the Funk in DCC Dice Rolling: Author Terry Olson tells you everything you wanted to know about odds in rolling dice, but were afraid to ask. He explains the dice chain, gives a couple of alternate methods of rolling ability scores, looks at critical hits, and mercurial magic, suggesting methods that the dice can be used to get more interesting results at the table.

Twenty Funky Dice Tables: Ken St. Andre provides twenty tables, from the relatively useless (D5: Five Games You Can Play With Your Parents) to the potentially useful (D12: When Good Magic Goes Bad). This is mostly an exercise in whimsical fun.

The Black Feather Blade: A level 1 adventure by Daniel J. Bishop, this offering sees your PCs attempt to gain the titular weapon before two NPC parties do. The adventure is themed around Malotoch the Carrion Crow God, so there are plenty of body parts involved. As such, there is a Luck mechanic called "Malotoch's Favor". Use it.

Some author's notes:
Xcrawl Apocalyse: The Athelete: "Dungeon Crawl Classics and Xcrawl come together at last! Get ready for the unholy spawn of Dungeon Crawl Classics, the dark RPG of glory and gold won by sword and spell, and Xcrawl, the game that’s nastier than a Type II demon with Type III herpes. Welcome to Xcrawl Apocalypse!" Brendan LaSalle offers the first class for this new unholy union.

Evil Reborn: Jon Hook offers a 4th level adventure which is essentially a sequel to DCC #13: Crypt of the Devil Lich. DCC #13 was written for 3rd Edition Dungeons & Dragons, but this is a Dungeon Crawl Classics adventure which brings elements from the original adventure into the DCC fold.

DCC World Tour 2014: Including scenes from the road with the Goodman Games crew.

The Seventh Pit of Sezrekan: This is a 0-level funnel by Harley Stroh. The author writes:


Hosted at Gen Con 2014, the Seven Pits of Serzrekan was the first Dungeon Crawl Classics RPG Funnel Tournament. Each player was given a single 0-level PC, and success in the tournament was judged by the number of encounters a PC survived. Over the course of four sessions, 136 PCs met their fate in the fell pits. The tournament ended in a 3-way tie, with each PC surviving no less than 8 encounters, and was decided by a dice-off on the last day of Gen Con. (See photos on page 53!)

Not all of the Seven Pits were explored during the convention. Submitted for your consideration: two areas that saw the least exploration, and the seventh and final pit of Sezrekan.

I don't know about you, but I would like to see the Seven Pits of Serzrekan available for purchase someday.

Funnel Character Sheet: For DCC Funnel Tournaments. You can now get these sheets pre-filled at Purple Sorcerer's website.

How to Run a DCC RPG Tournament Funnel: Worth reading if you want to do this. Also, you can listen to this episode of Spellburn. Or read this.

Dear Archmage Abbey: Fun flummery, as in the previous year.

The Hypercube of Myt: This is a 0-level tournament adventure written by Jim Wampler, Stephen Newton, Daniel J. Bishop, Dak Ultimak, Adam Muszkiewicz, and Jeffrey Tadlock. It was available as a free pdf for Free Role-Playing Game Day in 2015. I ran it at Dueling Grounds in Toronto. I was responsible for the Endless Hallway, which I originally envisioned as a length of cosmic intestine, causing me to create a few things that didn't fit in the final version.

Even More Mutations: Dieter Zimmerman offers some new mutations for James W. Ward's Metamorphosis Alpha. Some of the things in these two articles may be transferable to Dungeon Crawl Classics, particularly Crawling Under a Broken Moon, Crawljammer, or Mutant Crawl Classics.

Art Folio: Doug Kovacs: Now in glorious black and white. Including interviews with the gentleman artist.

The Mythos Alphabet: Written by Brad McDevitt, with the assistance of Jon Hook and Brendan LaSalle. The author writes: "In the tradition of our popular Dungeon Alphabet and
Monster Alphabet titles, here is a brief look at abecedarian inspiration from the works of H.P. Lovecraft. If you enjoy this concept, let us know...perhaps we’ll make a book of it!" How is this not a thing already?

Here we get D is For Deep Ones, M is For Madness, T is for Tentacles, and W is for Worshippers. Again, how is this not a thing already?

Art Folio: William McAusland: Now also in glorious black and white. Now also including interviews with the gentleman artist. I have to admit, Joseph Goodman has a good eye for hiring excellent artists, as paging through literally any Goodman Games product will attest!

Mutant Crawl Classics Preview: This is exactly what it says on the tin. Goodman Games has made this preview available here as a free pdf download.

Judge's Guild 1977 Fantasy Catalog: A reproduction only. Do not try to order from this catalog without an operational TARDIS!

The Gamer's Yearbook: Mostly flummery, in the style of the wanted ads and agony columns of yore.