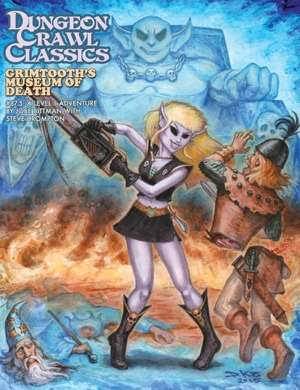 DCC #87.5 Grimtooth's Museum of Death is a 1st level adventure by Jobe Bittman with Steven S. Crompton. It was illustrated by Doug Kovacs, S.S. Crompton, Stefan Poag, and Brad McDevitt. The publisher is Goodman Games.

A bit of history: Flying Buffalo Games published the first Grimtooth's Traps book in 1981, leading the market in traps that you might hesitate to place in your dungeons. These traps were tough, and what they would do to the PCs who fell into them was often tougher still, but they generally had internally logical rules that would allow very canny players to defeat them. The "mascot" of these books was a troll named Grimtooth.

It didn't take long at all for gamers to learn to associate the name "Grimtooth" with "Killer Dungeon".

Fast forward to January 3rd, 2015, and Goodman Games begins its kickstarter for Grimtooth's Ultimate Traps Collection. Not only did this lead directly to the creation of Grimtooth's Museum of Death ("Based on the stretch goals achieved so far, we will be creating a Dungeon Crawl Classics module featuring Grimtooth."), but Grimtooth's Trapsylvania looms. From the Ultimate Traps kickstarter page:


Many moons ago, the adventurous entrepreneurs at Goodman Games visited my realm, and seeing its wonders, begged me to reveal to unwashed humanity, the splendors and horrors of Trapsylvania. After sufficient groveling and the payment of vast sums of platinum ingots, I agreed to give them a tome of greatness that would lay out my little empire so that GMs and dungeon masters everywhere might benefit from my vast wisdom.

The book is all written and I even allowed Goodman Games to add appropriate DCC stats and info on all the characters, creatures and traps within the book, so that all you Dungeon Crawl Classics players could use this book all the easier. There are of course my usual 1-5 skull ratings so that everyone else can use this book as well.

From the April 2017 update, it seems quite clear that a Grimtooth's Trapsylvania kickstarter is in the near future.

If Grimtooth, the Troll of Trolls, is synonymous with the killer dungeon, then Grimtooth's Museum of Death lives up to all expectations. That said, it is nonetheless survivable, and it is possible even to profit from your excursion to Castle Grimtooth. Stats are given for both Grimtooth and Grimtina...if you attack them, you are very likely going to die. Very, very likely. Even more likely than that.

Then again, the odds are also good that you are going to die if you do not attack them, but merely tackle the dungeons below Castle Grimtooth as planned. You may wish to bring your second-best character. The dungeon is "extremely hazardous and completely unfair"...so much so that an "Accidental Death & Dismemberment" sidebar is provided for "[w]eak-hearted judges" who wish to "temper the lethality of the traps".

Of great potential interest to the judge who remembers the Grimtooth's Traps series with fondness, the authors supply a complete patron write-up of the Great Troll, including all patron spells.

Not for the faint of heart. Perhaps not for regular campaign play, both due to tone and lethality. Nonetheless, you can adventure like it's 1981.

After three decades of preparation, the evil troll Grimtooth has finally thrown wide the gates of his abode to all comers. The troll has sent ravens far and wide inviting delvers to share in the vast wealth of his treasure room. Of course, there is a catch. The adventurers must wend their way through a maze of traps in Grimtooth’s Museum of Death, a curated collection of the deadliest and most devious traps ever assembled in one place. Along the way, they might even cross paths with a few of Grimtooth’s allies: Grimtina, Spike the Grimdog, and Sludgeworth. Tread lightly, delver. There are no refunds for this tour.