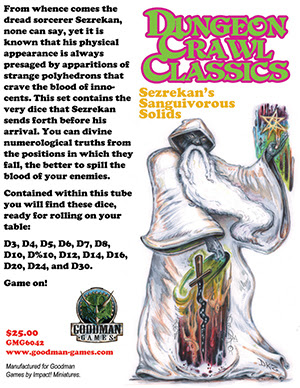 Hugh's Weird Dice: This set contains the very dice that Hugh the Barbarian used to defeat a host of terrible adversaries and acquire his legendary magical bell-bottoms. Using these dice in your game is guaranteed to bring good fortune, especially if you rub them on a moustache prior to each session.

Dice are white with red numerals. DCC extra is the "blue gowl".

Dice are black with gold numerals. DCC extra is the "violet gowl".

Chuck's Lucky Dice: These are the very dice used by Chuck Plimpton in his tavern games. He is reputed to be quite lucky, and if you doubt that, you should know that Chuck made it back from the land of the dead! He had a set of these dice on his person at the time, and while the dice probably had nothing to do with it, can you afford to take that chance?

Alamanter's Extraspacial Angularities: These dice were created by Alamanter the Violet during his studies in the city of Ciz. Each die draws upon the power of extra-dimensional space to randomly determine numbers. It is said that under the right conditions they can roll numbers that don’t even exist!

Dice are violet with silver numerals. DCC extra is "The Brined Finger of Alamanter".

Sezrekan's Sanguivorous Solids: These are the most dangerous dice ever created. The evil Sezrekan trapped in each the soul of a creature from the depths of the infernal realms, and these creatures crave blood! Whether it be your blood or the blood of your enemies, they care not! Beware fumbling with these dice!

These dice are many-colored. DCC extra is "Sezrekan's Sanguivorous Sliver".

Dice are blue with white numerals. DCC extra is the "Ice Stones of Mu".

Dice are red with white numerals. DCC extra is "The Devil's Bauble".

Grakk's Rad Dice: Seasoned veteran of many a melee, Grakk knows how to bring the maximum pain to any hand-to-hand battle. This set of radioactive green dice has been blessed by the War AIs themselves to ensure maximum damage when rolled in any combat on Terra A.D.

Kilra's Glow Dice: This set of dice glow-in-the-dark! Savage raider of the wastelands, Kilra knows when to push her luck and when to burn it. This set of glow-in-the-dark dice has already been exposed to the radiation and luck- enhancing quantum fields of Terra A.D.

Dice are that off-white/green color of glow-in-the-dark plastic with black numerals. MCC extra is "Kilra's Artifacts"

Available Goodman Games dice sets can be obtained here. The Dice of Lost Lemuria and Ming's Infernal Bones were only available at the Goodman Games booth at North Texas RPG Con and Origins in 2017. MCC-based dice sets were announced in 2017.

This listing was put together with the help of the Dungeon Crawl Classics community, and especially Impact Miniatures. Thank you for all the help!