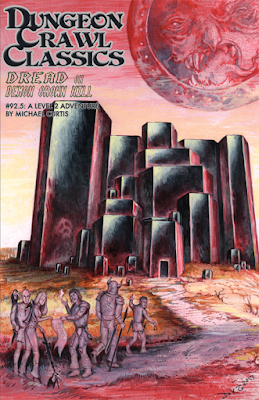 DCC #92.5 Dread on Demon Crown Hill is a level 2 adventure by Michael Curtis. It was illustrated by Doug Kovacs (who also did the cartography) and Stefan Poag. The publisher is Goodman Games.

This is a relatively new adventure, and one that could easily be fit into a convention or road crew game slot, so I am going to avoid spoilers as much as I can. Like many Appendix N stories, this adventure thrusts the PCs neatly into the story of other beings, but it is the PCs' actions that resolve the story in one way or another. This is such a constant theme of Appendix N literature - occurring in stories by Fritz Leiber, Robert E. Howard, A. Merritt, and others - that it is difficult to pinpoint influences here.

The area that the adventure takes place in is reminiscent of the Giant's Causeway in Northern Ireland (which the author calls out), or Fingal's Cave in Scotland. This offers a cool backdrop to the adventure's action.

The adventure itself is fairly linear, with only one possible side digression. That's great for convention play, but the prospective judge of a home campaign may wish to increase the options somewhat. Likewise, there are creatures in this adventure that should have a marked footprint on the land around Demon Crown Hill; the prospective judge will probably wish to consider this for campaign play.

Area 1-8 is singularly wonderful, and worth the price of admission by itself.

Long ago, Frygorix of the Thousand Lies, a foul demon, ruled with fear from atop a lonely tor, spreading death and plague across the land. Two brave siblings, one bearing an enchanted shield of great power, challenged the demon, vowing to slay it and free the land. In their climactic battle, black towers of six-sided stone arose from the hilltop, an eerie outcropping called the Demon Crown by some. Stories hold that the shield lied untouched within the Demon Crown, but who knows what else might dwell within those weird, dark pillages of unearthly rock?

Right now, Dread on Demon Crown Hill is only available through retailers. I picked mine up at 401 Games in Toronto.
Posted by ravencrowking at 10:38