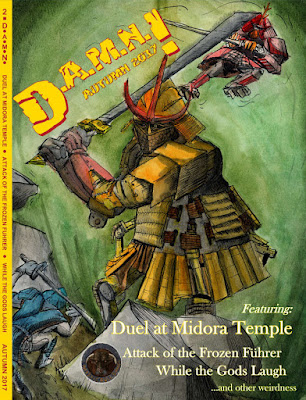 Disclosure: I helped nursemaid the first issue of D.A.M.N. into existence, and helped to move the publication to Mystic Bull so that it could continue to thrive. I am also mentioned on pages 4 and 5. Finally, I have a finger in Angels, Daemons, & Beings Beyond: Elfland Edition (I wrote a forward and backed the kickstarter) and more than a finger in Dark Trails Weird Frontiers (I wrote some critters and elixirs and suchlike...indeed, I am still doing writing for David Baity on this project). You can safely assume that I am biased when discussing this product.

From the DAMNed Pit: "Emergent Play and Long Delays" is an editorial by Paul Wolfe. The editorial has an addendum for "Late September", and the issue hit the virtual shelves on November 29th, so it is clear that there were a few delays. Perhaps there was some wait on content, but it is not apparent that this is so from the issue, which is so chock-full that it spills over into a free web supplement.

These items of "News in Third Party Publishing" include some things which have now been out for a bit, but it is definitely worthwhile to have a feature like this in D.A.M.N.!

Underworld Ranger: This is a character class designed for the Dungeon Crawl Classics version of Operation Unfathomable, which in turn gives a bit of a preview of the tone and art for Jason Sholtis' megadungeon setting. Writing and art are by Jason Sholtis, with Paul Wolfe supplying the DCC conversions and Stefan Poag supplying additional art.

Some parts of this article, like the Underworld Foraging Success Table, are quite fun and flavorful (pun intended). Strap on your ZR1 Dissuader, check your Chaosometer, and leap....er, carefully and stealthily creep....into the fray!

Queen amongst the sea-faeries, Dahudmorgan inhabits the rocky shores of Menegond, Thousand Rocks. During the day, she hides within a magnificent golden city under the sea or in one of the natural caves or grottoes in the sea-cliffs surrounding her home. At night she sings from her perch on one of the rocky islands that stretch along the coastline, combing her long golden tresses.

Duel at Midora Temple: This is a 0-level funnel, written by Paul Wolfe, which brings Oriental Adventures to Dungeon Crawl Classics in the form of the Ketsuin Empire. This is a complex adventure, taking place in a complex setting. You will need to download the web supplement to make characters. There is more than a small chance that PCs will oppose other PCs. There is more than a small chance that a player will be running two or more PCs which oppose each other. Good stuff!

Dashing Deeds Abound!: The Swashbuckler Class: Author James Spahn provides a class somewhere between the warrior and the thief, capable of Dashing Deeds of Daring, possessing a luck die, and having the ability to add both Personality and Agility modifiers to AC when unarmored.

Nalfeshnee: Lord of Pigs: A complete patron (except for the spell write-ups, which can be found in the web enhancement), by David Persinger. This includes statistics for wereboars and gore golems.

Lord Nalfeshnee, King Nalfeshnee, the God of Gluttony, or the Master of Butchers. Knowledgeable in vivisection, consumption and hoarding, he is the progenitor and namesake of all Nalfeshnee demons. When the most gluttonous of mortals die, Lord Nalfeshnee inserts their souls into his own mutilated horrors, forming the lesser Nalfeshnee who guard hoarded masses of treasure and relics of chaotic power. He frequently makes deals with rapacious mortals, granting them a short life filled with worldly delights, fattening their souls for future servitude. Secret guilds of butchers who desire customers with an endless hunger serve him. Wizards may make pacts with Lord Nalfeshnee, exchanging access to chaotic forces, in exchange for shepherding wild chaos magic back for their master’s consumption.

Attack of the Frozen Führer: This is a 3rd level adventure, by Julian Bernick, written for Nowhere City Nights. The mainstay of Nowhere City Nights in 21st Century technomagic pulp noir, but this adventure takes place in 1940. It revolves around Hitler's attempt to recover the Spear of Destiny from a museum in Nowhere City during World War II.

Flammable Hospital Crowdfunding Preview: This preview, by "the Mongrels" is....actually, I'm not sure what it is. It appears to be a LARP funnel based of Dungeon Crawl Classics? But there is a map? Perhaps someone will enlighten me in the comments...?

Those with the DAMNed Pen: Author bios.