How to Write Adventure Modules That Don't Suck: Volume 2 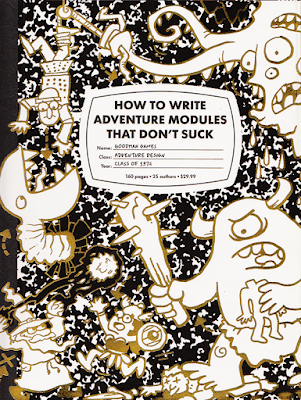 I wrote about the previous volume of How to Write Adventure Modules That Don't Suck here. Like the previous volume, the 2017 release is system-neutral (and/or covers more than one system). Unlike the earlier version, the 2017 release is a beautiful hardcover with a sewn-in ribbon bookmark and a very nice dust jacket. It also has Dungeon Crawl Classics content. You can also get it as a pdf.

As with every other "mixed content" product, I am focusing solely on the Dungeon Crawl Classics material. That doesn't mean that you won't want to look at the other content. First off, conversion to Dungeon Crawl Classics is fairly easy. Second, much of it is advice on adventure writing and presentation, and therefore is useful to the aspiring judge.

Unlike most of the items discussed in the DCC Trove of Treasures, this is mostly a book of advice. It contains advice for writing adventures, but it also contains a fair amount of advice for running adventures. I am not going to reproduce that advice here. I hope that the reasons for this are obvious.

Adventures in Context: This article, by Jobe Bittman, discusses contextual information as it relates to adventure design.

Encounter: "Dead Man's Chest": This is a short level 1 adventure by Jobe Bittman written for Dungeon Crawl Classics. The adventure pertains to a salvage operation underwater.

Encounter: "The Doom of Riego": By Mike Breault, this is a short adventure which does not include any statistics.

Listen! Do you smell something?: Anne K. Brown discusses using details that evoke all five senses. There is an extended discussion of the "Show, don't tell" principle.

Encounter: "Follow Your Nose": This is a short, systemless encounter. Maybe. It actually reads more like fiction. Or the introduction to the actual adventure. Certainly, if run as written, there is little or no agency given to the players...this is more an example of description than anything else. The author is Anne K. Brown.

Encounter: "Feeding Time": Timothy Brown offers a encounter/short adventure for a science fiction scenario. Statistics and system are not provided.

There Are No Empty Rooms in the Wilderness: Stephen Chenault wants you to keep all of your players engaged during wilderness adventures. Discussion of weather and terrain are provided.

Raison d'etre - "Or Why Everything in Your Adventure Should Have a Reason for Being There": Christopher Clark offers an article describing how logical placement of elements in an adventure leads to verisimilitude, and thereby increases player enjoyment.

Encounter: "The Overlook": A systemless adventure by Christopher Clark for low-level PCs.

Know (and Love) What You Write: Anyone familiar with Dungeon Crawl Classics knows the name Michael Curtis, who herein writes about knowing your material, and using your passions to your advantage. Are you an armchair historian? Do you have a passion for antiques? Then use the details you know in your game!

Encounter: “Denkin’s Trading Post & Rarities Brokerage”: Michael Curtis gives an example of what he means, by completing an idea partially developed in his article. Based on the potential treasure in the Trading Post, the judge would have to do some rethinking if using this for the Dungeon Crawl Classics role-playing game.

How to Write Encounters That Don’t Suck: This effectively amounts to a basic tutorial by Chris Doyle, but it is worth reading nonetheless.

Encounter: “The Deadly Crevasse”: This is a higher-level encounter in a cavern, which appears to have been written for 2nd Edition Advanced Dungeons & Dragons. It is written by Chris Doyle.

A Publisher’s Perspective On Adventure Modules That Don’t Suck: If you want to break into the adventure writing field, it behooves you to pay attention to what publishers are looking for. In this case, Joseph Goodman offers some thoughts after 15 years in the business, with nearly 200 adventures published.

Encounter: “Eye of the Storm”: A Sample Encounter: An encounter by Joseph Goodman, written for Dungeon Crawl Classics.

Keeping Encounters within the Capabilities of Your Players: Allen Hammack talks about encounter balance. Allen Hammack is one of the TSR luminaries from early days (in fact, he wrote The Ghost Tower of Inverness and Assault on the Aerie of the Slave Lords), and I can see what he is driving at here. I can. And yet...and yet...I cannot agree with his advice entirely.

When devising an adventure, I personally try to scale things based upon an imaginary average group of characters. If the actual players have a smaller group, can't open a door, or whatever, I most emphatically do not scale the adventure to the group. IMHO, superior play includes preparing for encounters that target your weaknesses as well as your strengths. And, if you should happen to all be charmed by harpies and eaten, well, that is what happens.

Dungeon Crawl Classics puts mechanisms like Luck and Spellburn into the player's hands. Might Deeds can help disengage from a foe. Patrons and gods can be called upon for aid. And, if there is a TPK, the action can always pick up in Hell.

So, I say, Yes, keep this stuff in mind when designing adventures if you must, but No, now when running them. What the judge anticipates happening does not need to happen at the table.

Making Monsters Cooler: Jon Hook describes how to modify monsters to make them less mundane. His sample creature uses a 1st Edition Advanced Dungeons & Dragons statblock. In addition to the excellent advice herein, I urge you to consider The Monster Alphabet and The Random Esoteric Creature Generator.

An Adventure’s Story: Kevin W. Melka discusses crafting your adventure like a story. There are games whose adventures are written like this. I would encourage the prospective judge to instead consider the adventure's story as "What happened before the PCs got involved?" and "What is the current situation?" Even an adventure that follows a sort of story structure (like Prince Charming, Reanimator, or The Dread God Al-Khazadar) should follow only the likely course of events, ensuring that the players are free to chart their own character's destinies.

Encounter: “The Old Lair”: By Kevin Melka. That looks like a late 3.5 Edition statblock to me.

Unleashing Your Dungeon Creativity: Brendan J. LaSalle gives every prospective GM a course (or refresher course!) on how to keep your creativity flowing. And how to write better. And he reminds you to take good care of your playtesters.

Encounter: “The Chamber of 100 Axes”: Brendan J. LaSalle hits the random article finder three times on Wikipedia, reads the article, and then provides an encounter for Dungeon Crawl Classics based on the results.

Something Worth Fighting For: Author Lloyd Metcalf talks about PC motivations, and why the GM might want them to have a family and a hometown. Making this actually work in-game is discussed in a fair amount of detail.

Encounter: “Shock Spiders”: By Lloyd Metcalf, using a creature whose statistics are given in 1st Edition Advanced Dungeons & Dragons format (or a reasonable facsimile thereof).

Encounter: “The Swamp of Doom”: 3rd Edition example by Bill Olmesdahl of the principles in his article.

ATMOSFEAR: How do you create a feeling of unease among your players? Steve Peek supplies advice for building tension in your games, which is as applicable to horror-style games (such as Chill or Call of Cthulhu) as it is to the more traditional fantasy games the article focuses on.

Encounter: “Dark and Deep”: By Steve Peek. As much a piece of fiction as it is an encounter, this offering is systemless.

The Sense of Adventure: Jean Rabe discusses engaging all senses when creating or running RPG adventures.

Encounter: “Water’s Garden Shop”: A bit of fun that appears to be designed around Advanced Dungeons & Dragons, although statistics are not provided.

LEGO® Building Toy Maps: The legendary Merle M. Rasmussen discusses the use of Lego when running games and designing scenarios meant to engage the players creativity.

Encounter: “Shipwrecked on Lay-Goh Island”: "A dungeon without walls and a wilderness without beasts of burden" intended for use with Lego, by Merle M. Rasmussen. System neutral.

All Aboard for Adventure: Lester Smith describes the "train yard" method of adventure design, as well as the three-act outline. This is the only "How To" article that doesn't include an encounter by the same author.

Run Your Best Game Tonight: DCC luminary Harley Stroh offers some advice on running adventures that don't suck. Harley writes "Back to my doomed campaign. I had made a second, far more offensive mistake by planning the PCs’ story in advance. I had robbed the players of any agency, replacing it with an experience I thought would be cool." I strongly recommend that you keep those words in mind when reading some of the other advice in this volume.

Encounter: “The Oracle”: A system-neutral encounter by Harley Stroh.

The Risk vs. Reward Equation: Jim Wampler reminds you that big risks require big rewards, and vice versa. Big rewards here do not mean more gold pieces, but rather epic stories that players will love to tell years after the last die has dropped. Note that Jim Wampler is not talking about story as "what will happen", but rather what the PCs will overcome and/or accomplish and/or learn from the adventure...the stories they had a part in creating, rather than the story the GM tells them.

Encounter: “The Caprapod Nursery”: This is a short encounter by Jim Wampler, written for Mutant Crawl Classics.

Player Character Death: James M. Ward (of Metamorphosis Alpha and Gamma World fame) does not mind at all when a character dies during a game. He writes "Learning from the words of Gary Gygax, I feel the possibility of character death is necessary to promote the best in game play. The tension of worrying about the life of your character brings great joy to the game play." I could not agree more!

Encounter: “Smallish Chamber of Doom”: James M. Ward revisits Monty Haul from the early days of The Dragon and The Strategic Review. I'm not really sure which system the statistics are designed for.

Tell a Story: Author Skip Williams, thankfully, is discussing the stories in the adventure's background, rather than "What your PCs will do". Pitfalls as well as benefits are discussed.

How to Design Setbacks That Don’t Suck: In the fiction that inspires the game, the protagonists do not move from one narrow victory to another. Rather, they encounter setbacks and defeats on their way to final triumph. Steve Winter discusses how to do this in role-playing games, without the players feeling that they are being abused.

Encounter: “Lair of the Chokebats”: Steve Winter supplies a cavern encounter where things go from bad to worse. The adventure is largely system-neutral.

Joseph Goodman has done a fantastic job of bringing voices from the Good Old Days of the hobby together with more recent authors of equally excellent work. This volume is far more likely to inspire the prospective Dungeon Crawl Classics judge than is Volume 1 (at least, in my opinion), but if you pick this up in pdf format, you'll get both volumes. You can compare them yourself. Let me know in the comments if you think I am wrong!