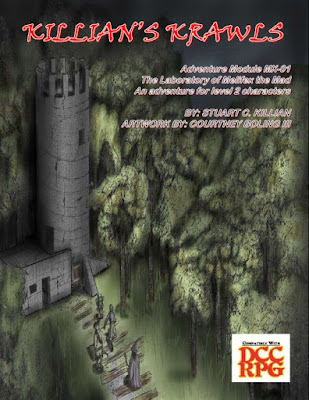 Killian's Krawls: The Laboratory of Melifex the Mad is a level 2 adventure by Stuart C. Killian. Art is by Courtney Boling III. The publisher is FSH Professional Ltd.

This is a relatively short adventure, with a fairly uncomplicated storyline, which could easily fill a 4-hour convention slot or an evening of gaming. The city of Pinecliffe is described with a fairly broad brush, but using tools to flesh it out (such as those described in the DCC Lankhmar boxed set) could provide the judge with some added value. No map of Pinecliffe is provided.

Arriving at the gates of Pinecliffe reminds me of arriving at the Keep in The Keep on the Borderland, but the rest of the adventure suggests that the author might have played 3rd or 5th Edition Dungeons & Dragons prior to picking up Dungeon Crawl Classics. There is, for example, a suggestion that potions can be bought and sold, and the PCs might be able to buy +1 daggers. which the judge may wish to modify before running this adventure.

The judge is also cautioned to consider imposing limitations on some of the magic in the adventure. For instance, there is an item which could presumably be used again and again, as written, to beef characters up far beyond what is normal in DCC. Unless the judge introduces risk, drawbacks, or limitations, this item will certain change the nature of a campaign!

This adventure does include interesting new monsters, as well as three new 3rd level spells: Intrude, Attract, and Deflect. The judge may wish to give these spells more colorful names, such as Melifex's Mental Intrusion. These spells seem under-powered to be 3rd level in DCC (to me, at least), and judges should feel free to reassign their level if they wish.

The pdf includes several pages of "GM's Tools": Encounter Sheets, a Treasure Tracking Sheet, and an Experience Tracking Sheet.  These might be of use to some. I know that I sometimes forget where a particular gem or piece of treasure came from, and have to either take a moment to look up its value, or make it up on the spot. This still seems like a lot of space for the potential benefit.

The judge who buys this should expect to do some work to have everything mesh with their campaign and the game as a whole. With the previous caveats, though, exploring a wizard's tower/laboratory is always fun. Expansion would be welcome, as would encounters (combat or not) which point towards the wizard's stated goal of removing corruption: i.e., creatures which clearly suffer from, or are made wholly from, corruption. Removing corruption is a "Quest For It" waiting to happen, and if the wizard had found the means, with potentially dire consequences, PCs might have been left with an interesting choice - is getting rid of that squid beak worth the risk?

The city of Pinecliffe has tolerated the presence of Melifex the Mage for years, but his corruption and increasingly unusual experiments eventually had him driven out of town and to a secluded tower on the ridge overlooking the city. Now, no one has heard from Melifex “the Mad” for two months, and the city is becoming worried. Did Melifex die from his corruption or has he unleased a sinister force that could destroy the land! Answers, adventure, and priceless magical treasure await the party brave enough to find out.