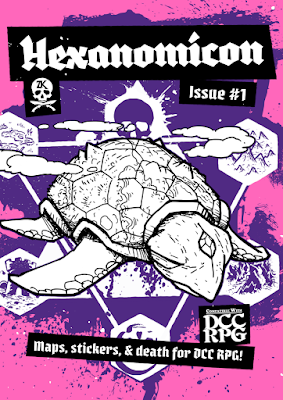 The Hexanomicon #1: Maps, stickers, & death for DCC RPG was written and illustrated by Ariel Churi. Additional material by Anne Hunter (2018 Gongfarmer's Almanac, Volume 3) and inspired by Michael Curtis (The Adventurer's Almanac). The publisher is Zariel Kuri.

Disclosure: I backed the successful Kickstarter for this product, and I was sent a free copy of the print materials.

The Hexanomicon #1 is a toolkit for creating Appendix N-style hexcrawls during play. This product certainly has utility for those judges, such as myself, who prefer to plan areas ahead of play, but is designed to be used at the table. I haven't tried creating a hexcrawl using it, but it is full of useful features, and the Beastomatic has definitely come in handy.

In addition to the booklet itself, The Hexanomicon comes with an area map sheet intended for use by the players, and area map sheet for the judge, a world map sheet (which can be used to organize judge area map sheets), a month calendar sheet, a year calendar sheet, 2 sticker sheets containing images for fast mapping, and 1 sticker sheet containing images for Fleeting Luck tokens. Obviously, if you purchase these in pdf form, you will need to supply label paper for the sticker sheets. Equally obviously, you will want to create many copies of these additional materials anyway. The stock used for the delivered calendar and map sheets is better than the average copy paper stock - a very nice touch from my perspective.

Let's jump into the booklet itself, shall we?

The Hexanomicon starts with a quotation (The Void) from the Rig Veda (translated by John Muir) and an Introduction thereafter. You can consider these as sign posts indicating what the booklet is, and is not. A toolbox rather than a setting. One which will help create flavor and excitement, but which should be used only as needed.

Cartomancy: A method for filling out the judge's hex map (and, consequently, the players'). This section considers the alignment of the hex, its names, and effects that it might have once entered. It also considers that some hexes may be impassable (at least under normal circumstances). In addition to the standard Lawful, Neutral, and Chaotic hexes, there may be Doom hexes, and woe betide the sojourners entering such blighted lands.

This section also considered the time (in days) that it takes to cross a hex, and what this might mean in terms of provisions and supplies.

Finally, you are given tools to randomly name hexes or areas you have created. Altogether, this is a pretty powerful system for quickly determining what is in a region you haven't already set up as a judge.

Beastomatic: A good section of this booklet is given over to giving judges the means to quickly create DCC-compatible monsters that are both interesting and simple to create/run. Examples are included.

It should be noted that this is not the be-all and end-all of monster creation, but it is certainly a valuable tool in the judge's toolkit...more so if you are pressed for time and/or ideas. Along with The Random Esoteric Creature Generator, The Monster Alphabet, and the Make Monsters Mysterious section of the core rulebook, this is a resource that the judge will use again and again.

(For a deep dive into monster creation, see this blog article.)

Death by Hex: A consideration for when the PCs need to run or be rescued.

Psychogeography: A discussion of ley lines (and similar telluric currents), which considers how various characters may locate and utilize them.

This is so jam-packed with good stuff that one has to wonder what is left for future issues?

The Hexanomicon is a setting toolbox rather than setting. It is devised as a way to connect the various adventures a party may undertake and be a neutral background to those adventures as well as a blank tablet for your story. A secondary function is to provide a downtime cost to burning luck and spellburning. The major difference between the map we will create here and other hex maps a party may journey across, is that these hexes do not indicate an amount of space but rather a story element. If there is an ancient tower the party will break into, that tower takes one hex.

The process is simple. As the party move to a new area, the contents of that hex are determined. You can either choose the contents based on the story, or you can roll on a table. Likely it will be mundane plains or forests but points of interest are usually separated by chaotic landscapes. Random tables determine the type and name of areas like; The Black Womb of Sorrow, or The Doom Wastes. These lands all have their own flora and fauna. Parties that are low on their luck are likely to discover such randomly created beasts as Electric Spider Women or Blood Rats.