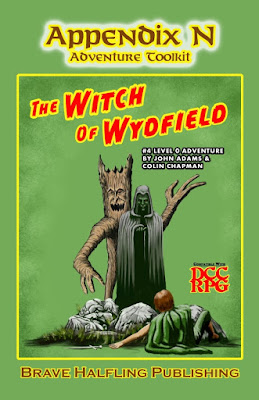 Appendix N Toolkit #4: The Witch of Wydfield is a 0-level adventure by John Adams and Colin Chapman. Art is by Steve Zieser (cover) and Mark Allen (including cartography. The NPCs, "Reed" and"Peter" and the location, "Potbelly's Pub”, are courtesy of Brandon Homes. The publisher is Brave Halfling Publishing.

As discussed elsewhere, this product began with a successful Kickstarter campaign with troubled fulfillment.

The Witch of Wydfield is a short funnel adventure, which can easily be played within a 4-hour time slot. If you've ever thought of the funnel as being a peasant mob with torches and pitchforks from a Hammer Horror film, this adventure will provide exactly that.

You are abruptly awakened by the frantic sounding of the chapel bell. As you gather with the other villagers in the village square, you are told that the light of morning has revealed that Sister Thara has been murdered and the young maiden Dela, is missing. The only clud to this terrible mystery are three letters written in blood beside Thara's body; "Y U L."

Thara was the town's protector and healer. Now she is gone. Who will protect Wydfield now? Who will right this wrong? No man, woman or child will sleep again in Wydfield until this evil is dealt with and defeated. If there was ever a time when Wydfield needed new heroes, now is the time! Who will go?

You can get it as part of a bundle Here!
Posted by ravencrowking at 05:32