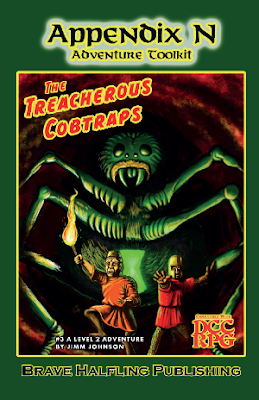 Appendix N Adventure Toolkit #3: The Treacherous Cobtraps is a level 2 adventure by Jimm Johnson with Jeff Linx. Art is by Steve Zieser (cover), Andy Taylor, and Mark Allen (including cartography). The publisher is Brave Halfling Publishing.

This is the product of a successful
Kickstarter that resulted in a few less-than-satisfied customers. The publisher dealt with some serious misfortune, and certainly tried to make everyone happy, but sometimes things don't work out that way.

I know it is not the first time that I have said this, but The Treacherous Cobtraps is one of a series of small adventures that appears to be direct riffs of the wilderness encounters in The Keep on the Borderlands. See also The Vile Worm and The Ruins of Ramat can stand in for the lizard man mound.

Despite the issues with how these adventures came to exist, I think that Brave Halfling's Appendix N Toolkit series filled an important niche in the repertoire of DCC judges. Like In the Prison of the Squid Sorcerer or my own Campaign Elements series, it provides resources that allow the players to leave the rails and discover a larger world. These are not gigantic adventures; they are things that you can throw in as you need them, like salt added to the stew which is the campaign milieu. Rather than sitting down and saying "We are going to play The Treacherous Cobtraps", this is an adventure that works best if it is introduced while the players are expecting something else.

Sanctum Secorum Episode 39b - Halloween 2018 discusses this product. It also come up in Episode 5 and Episode 12.

My pdf copy of this adventure doesn't include a back cover. As a result, I cannot include the back cover text as part of this listing. If someone can transcribe it for me, I will update the listing.

At the time of this writing, this product no longer appears for regular sale anywhere I can find.
Posted by ravencrowking at 10:12