In the Prison of the Squid Sorcerer 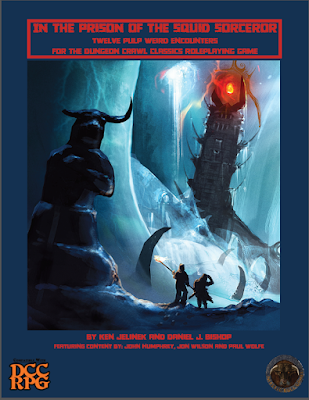 Disclosure: I am a writer, illustrator, and editor on this project. If you are curious, my illustrations are on page 5 and the bottom corner of page 10.

In the Prison of the Squid Sorcerer offers a dozen small adventures or encounters, suitable to intersperse among a much larger campaign. I became involved with this project through Paul Wolfe, who had worked with me on Angels, Daemons, and Beings Between.

This was around the time problems were occurring with the patron book, and backers were getting antsy. Paul Wolfe attempted an Indiegogo campaign to fund In the Prison of the Squid Sorcerer that raised a paltry $850 of a $3,500 fixed goal. And who knows? Being stung with the previous Indiegogo campaign might have turned some people off. Not only were two people from Angels, Daemons, and Beings Between major parts of the design team, but the failed project was actually referenced.

(David Fisher, who also supplied art for In the Prison of the Squid Sorcerer, was the principle artist for Angels, Daemons, and Beings Between, and is largely responsible for the eventual appearance of the Expanded, Otherworldly Edition. Still, I don't think he was mentioned in the Mystic Bull Indiegogo campaign.)

Despite  this, Paul Wolfe decided he wished to go ahead, and, after a rocky start - the incident with the previous Indiegogo nearly split up a good team! - I went with him. This was actually entirely driven by Paul Wolfe, because I had been shaken pretty badly by our previous experience together. So, if you find that you are a fan of this work, serious praise should go to Paul Wolfe. He navigated a difficult time with grace and perseverance!

In the Prison of the Squid Sorcerer: "Driven ashore by a supernatural storm, the party competes with a pirate and his crew to find the brother of a local noble. They soon find that the brother was imprisoned by a god before he could fully bond himself in the service of Cthulhu!"

This is a low-level adventure written by Ken Jelinek. Unless memory fails me, this is the first published Dungeon Crawl Classics adventure that followed the core rulebook's lead and made use of Cthulhu himself!

Mermaids From Yuggoth: "Wintering in a small village, the characters encounter an ancient evil from beyond their world."

This adventure is a series of encounters designed for four to six 3rd level characters, and was intended to "extend over several sessions with other adventures interspersed; as a result, the PCs may be 2nd level at the beginning of the series if they gain a level by the climax." This is the first published Dungeon Crawl Classics adventure to use this format, although there is a second in this volume. I am the author.

The hedge mage, Eric Silverjohn, was named for Silver John, or John the Balladeer, created by Manly Wade Wellman. This is the first Dungeon Crawl Classics adventure to specifically reference those stories, marking it as a possible add-on to a Shudder Mountain campaign, if the judge so desires. The Face in the Frost, by John Bellairs, is also referenced. This is, in part, because Yuggoth, a planet invented by H.P. Lovecraft and sometimes identified with Pluto, is actually mentioned in The Face in the Frost.

The adventure was written based on an illustration by Soriah Esquivel, which appears on Page 14.

Shadows of Malagok: "At the behest of a god, patron, or other powerful entity, the party seeks a powerful artifact within a dismal swamp. They quickly discover that the swamp conceals a shrine to Malagok, the Creator Beast."

This is a mid-level adventure (average 5th level), written by Jon Wilson. It is primarily two encounters, and it ends with a host of questions. This is the sort of thing that a good judge could build a campaign around, if she so desired.

Swindled at the Laughing Harpy: "Seeking respite, perhaps at a tavern in a large town or
a roadside alehouse in the wilderness, the characters encounter two grifters, brothers, under the control of a strange entity. And it all starts with a simple request."

This is an adventure for any level, by Paul Wolfe. It deals with an entity, the Painted Woman (or the Countess of the Veil), who may appear only in a single evening's gaming, or who could potentially be fully developed as a patron. This entry is really a happenstance between adventures, and, depending upon their level, PCs should either flee or fight. Figuring out which applies is not the judge's job!

This is a low-level encounter/adventure written by John Humphrey. I have run it at home, with the outcome that the players wanted to know more about the Visitants. I call that a win. As with the Mist Men's first appearance in The Ooze Pits of Jonas Gralk, I would welcome a further adventure with the Visitants, which further develops who they are and where they came from.

Sails Aflame!: "A massive skarajian , or giant flint beetle, attacks the character’s ship. Alternatively, the characters could discover the creature’s grotesque courtship displays on a lonely stretch of beach. Even with the help of NPC sailors, the skarajian is a difficult creature to slay outright, though its single-minded behavior may save a lower-level party."

This is a low-level encounter by Jon Wilson, which really serves to introduce a monster.

Cave of the Ice Mistress: "Rescuing a maiden imprisoned by bizarre, other-worldly arachnids leads to a deadly game of cat and mouse with the Ice Mistress. The characters must avoid her crystalline spider pets and her terrible gaze that will turn them into statues of ice!"

This is a mid-Level (4-8 5th-level characters) adventure/encounter by Ken Jelinek, designed to be used while the PCs are travelling through some cold region.

The Long Sleep: "Seeking either the village undertaker or perhaps a lost item among the dead, the characters investigate a mausoleum only to discover that a would-be necromancer has very recently taken up residence during his year-long arcane sabbatical to achieve necromantic affinity."

This is a low-level adventure by Ken Jelinek, designed for 8-12 0-level characters or 4-6 1st-level ones. I have run this at home, while the PCs were travelling, and it was satisfying. I am not 100% certain, but I believe that the PCs were level 2 at the time.

The Cult of the Flickering Sign: "Discovering a grisly murder in a back alley, the characters are drawn into investigating a strange symbol that shifts and changes depending on the viewer."

A 3rd level encounter by Paul Wolfe. "Though it can be adapted to any level party, parties below 3rd may be overmatched if they stand and fight." An excellent mini-scenario for an urban-based game!

Another Man's Treasure: "Discovering an abandoned treasure hoard, the characters get more than free riches when their luck subtly changes. Finding the cursed coin amid the easy money is the first challenge; identifying the exact nature of the curse may be harder!"

I have written about this encounter before, and my high opinion of it has not changed. This encounter, by Ken Jelinek, is for any level. It makes excellent use of Luck, which is one of the things that differentiates Dungeon Crawl Classics from the versions of Dungeons & Dragons that are its immediate antecedents.

The Nazhghad's Invocation: "While traveling through the wilderness, the party discovers a savage wizard and his men-at-arms attempting to capture a vile creature. As they attempt to intervene, an enchantress arrives bent on releasing the creature and killing the wizard."

This is a mid-level encounter by Paul Wolfe, which deals with the rivalry between A’Kas and the Nazhghad, highlighting patrons and spell duels in the process.

Icon of the Blood Goddess: "Within the back alleys of a metropolitan area, an icon of an emaciated goddess has broken through ancient brickwork. As the Blood Goddess gains worshippers, she becomes more difficult to defeat. Worse, some of the PCs may inadvertently become worshippers, and what may have seemed benevolent at first becomes a curse…."

This is a mid-level adventure, which I wrote, "designed to span several gaming sessions. Judges may wish to insert these strange and horrific happenings into any adventure or as interludes when characters return to town. With this in mind, the early encounters are suitable for parties of level 0 or 1, and the encounters quickly become more difficult. Characters should be at least level 3 for the final encounter."

This adventure makes use of the "Magic Here and Magic There" advice from the core rulebook, having specific tables for spellcasting side effects and spellburn side effects. I believe that this is the first time these types of table were used in a published Dungeon Crawl Classics adventure.

I actually ran this adventure using two 6th level PCs as protagonists, interspersed with a murder investigation and other events. It was a lot of fun....especially when the cleric realized that lighting candles to the Blood Goddess wasn't a good move, despite the immediate benefit!

At the end, the PCs were happy to note that 50 gp rubies that remove 1 point of Luck were a perfect thing to sacrifice to lower disapproval. Not only is the value exactly what is needed, but your Luck goes up when you do it! I hadn't intended that, but I was pleased that they had the wit to gain what advantages they could....