Journey to the Center of Áereth 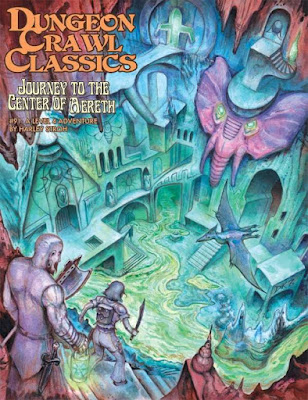 DCC #91: Journey to the Center of Áereth is a 4th level adventure written by Harley Stroh. Art is by Doug Kovacs, William McAusland, Brad McDevitt, Peter Mullen, Russ Nicholson, and Stefan Poag. Cartography is by Mark Allen and Doug Kovacs. The publisher is Goodman Games.

Disclosure: I have writing credits on two supplemental products to this adventure.

This adventure is, in part, explicitly inspired by Robert E. Howard’s Tower of the Elephant and Worms of the Earth, Edgar Rice Burroughs’ Pellucidar, and H.P. Lovecraft’s At the Mountains of Madness.

I would think that it was also inspired by Jules Verne's Journey to the Center of the Earth, as well as modules D 1-2 Descent into the Depths of the Earth and D3 Vault of the Drow by Gary Gygax for Advanced Dungeons & Dragons. As one approaches the depths of the planet, gravity is reduced, making your PCs stronger in a way that is reminiscent of Edgar Rice Burroughs' John Carter/Barsoom novels.

Lin Carter's Zanthodon novels, while not explicitly mentioned, could also be used as a source for expanding this adventure...and there is definitely room for expansion! In effect, the aspiring judge is given a whole new world to play with - one that is as strange and compelling as the Purple Planet.

The basic conceit of the adventure is pretty simple: your PCs discover a way into passages leading to the Center of Áereth. The adventure is roughly divided into getting access to the passages, traversing the passages, and what you find once you reach the end. What you may discover in the Center of Áereth is further expanded upon in DCC #91.1: The Lost City of Barako and DCC #91.2: Lairs of Lost Agharta. One could also use the Adamantine Mole from The Imperishable Sorceress to reach the Center of Áereth...which implies that the Builders may make some appearance in your home-brewed adventures there, or some later adventure(s) published by Goodman Games.

It should come as no surprise that the long journey has to be glossed over to some degree. There is no way that an adventure of any reasonable size could lay out all of the potential routes and sidetracks of such an exploration on a 10' x 10' square scale. As a result, the judge may make any number of expansions on this section, adding whatever degree of granularity is desired. Just be careful to finally get to the main event. The adventure does include a table of random encounters and events that can occur during the journey, as well as tables for various sections of the destination.

The destination itself is painted in broad strokes....which it must be, because it represents a whole new campaign "world" that could easily be as large as a surface continent...or larger. This could easily have been a boxed set.

The stories have reached you: A world beneath our own, lit by a brilliant sun and ruled by sages beyond reproach, where magic has replaced the spoken word, the weakest slave is like unto a superman, and the domes gleam with hammered gold.

Your trek to discover the truth will take you through endless caverns, ancient causeways and along unknown rivers. An expedition worthy of true explorers, Journey to the Center of Áereth offers characters the adventure of a lifetime – or the means to a quick doom.