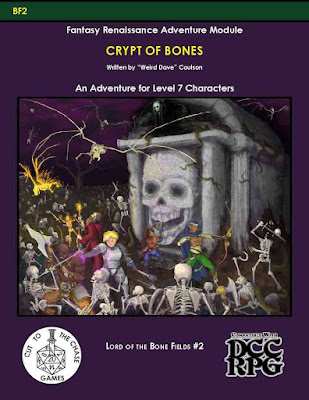 BF2: Crypt of Bones is a level 6-7 adventure by "Weird Dave" Coulson. Art is by Aaron Ostman and Timothy Wilsie, with cartography by Glynn Seal. The publisher is Cut to the Chase Games LLC. It is the second adventure in the Lord of the Bone Fields series.

Like the other Cut to the Chase adventures, this one is written for a number of systems, including a level 10-12 5th Edition Dungeons & Dragons version, as well as versions for Swords & Wizardry, Pathfinder, etc.

Being converted into multiple systems doesn't automatically become a flaw with an adventure, but it does set up special problems for the writer and publisher. Having read, but not yet played, the adventure, I am willing to venture an opinion that Weird Dave and Cut to the Chase Games are getting a handle on how to convert adventures to Dungeon Crawl Classics. Of course, I cannot say how much this version differs from the others, and there are a few rough edges that the contentious judge may wish to smooth over, but there is a lot to like here.

Dungeon Crawl Classics currently has a dearth of higher-level adventures, so that automatically makes this a welcome addition. There are some nice bits that work well with the general precepts of DCC (monsters are definitely mysterious, the adventure has to do with the machinations of patron-level entities) and even some good use of game-specific mechanics to prevent problems from being solved too easily (specifically, disapproval in the Black Graveyard).

The adventure itself is difficult, and may tax the abilities of the relatively powerful adventurers it is designed for. That is how it should be. Characters will have a real chance to shine, and, because of the way the adventure is designed, for the first time I am happy to see a section of monster statistics at the back of the book - but I would be happier yet if those statblocks also appeared where needed in the adventure text.

To get the most out of this adventure, the judge should consider introducing elements of its setting early on in the PCs' careers. There is no reason that they could not have won over the towns folk of Amberdale, or had a strong relationship with the aged Father Barondo, for many game years. This can make the adventure far more personal to the players and may prevent them from simply leaving the town to its fate. These factors arise in the Involving the Characters section on page 3.

Another idea I had reading this, not mentioned in the text, would be to run the siege of Amberdale as a combined higher-level adventure and funnel. Each player takes charge of four 0-level villagers to resist the un-dead hordes.

This accomplishes a few things: First, it gives the players greater reason to take risks with their higher-level PCs for the villagers. Second, it creates a pool of 1st-level PCs which can be used as torch-bearers and aides-de-camp for their more accomplished leaders. Third, it allows the judge to demonstrate just how thoroughly the town would be destroyed if not for the higher-level PCs. Finally, it provides people for the un-dead horde to kill that the players care about. Assuming that the players are smart - and lucky! - enough to avoid a TPK.

Cut to the Chase Games provides adventures which are strongly reminiscent of the content and style of 1st Edition Advanced Dungeons & Dragons, which can be a good thing (I have many fond memories of those adventures!), but don't expect the "gonzo" of many Dungeon Crawl Classics products. Expect instead to get enough material for at least 1-2 game sessions, a siege against an un-dead horde which is potentially epic in scale, and a dungeon that, while not as unique as a Harley Stroh or Michael Curtis setting, can potentially result in a TPK if your players are incautious or unlucky.

Should a compilation volume ever arise, a patron write up for Lamotruu, He of the Withering Gaze, would be keen.

You can read the author talking about running the 5e version of the adventure at Gary Con here.