In the Wake of the Zorkul 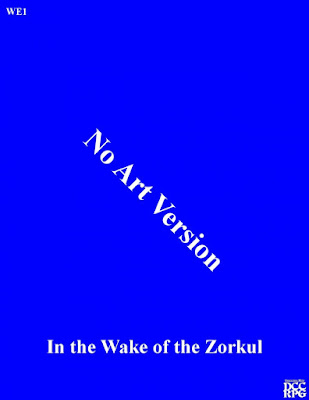 In the Wake of the Zorkul: No Art Version was written by Oliver Korpilla. The publisher is Mount Parnassus Games.

This adventure is a 0-level funnel, which could be adapted for use with higher-level characters (an alternate hook and adventure start are given in this case).

If you have ever played The Inn at Five Points with Brendan LaSalle, the beginning should seem sort of familiar to you - you are in an inn that falls into a sinkhole, and must then deal with what you find in the caverns. There the similarity ends.

(I would be interested to know if Brendan was running his adventure before In the Wake of the Zorkul, which was uploaded on August 06, 2014. Is this a coincidence, or is there a connection?)

In the Wake of the Zorkul is all about resource management (food, water, and light) while attempting to find a way to escape the cave system you find yourself in. Oliver Korpilla created an interesting and evocative setting, including descriptions of harmless wildlife that can sometimes freak your players out if you are lucky.

I ran this adventure two weekends ago, at the time of this writing. Although there are several potential ways to escape the cave system, none of them are necessarily obvious, and all of them require the players to be willing to risk the unknown. Some highlights of the game included:


All in all, this was a fun adventure. The "No Art Version" is a free pdf, but I would gladly pay for a print copy with illustrations. There are a lot of points where it could be expanded, allowing the judge to use the exit location chosen by the PCs as an entry to the Underdark proper.

An inn. Usually a place to find entertainment or rest. Instead the earth opened beneath,
swallowed the place whole and now you're fighting for your survival in an underground world.