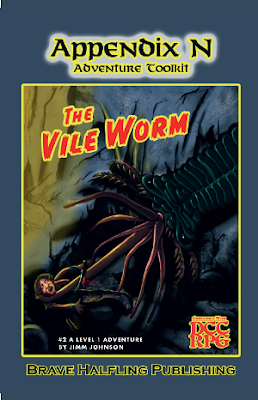 Appendix N Adventure Toolkit #2: The Vile Worm is a level 1 adventure by Jimm Johnson with Jeff Linx. Art is by Andy Taylor (including cover) and Mark Allen (including cartography). The publisher is Brave Halfling Publishing.

Dungeon Crawl Classics backers have had a fairly good run with crowdfunding, but this was a project that started with a successful Kickstarter and ended (?) in angry comments. I have a lot of sympathy for the publisher, who has always been more than fair to me. That said, this has still been a shit show for many people, and I have sympathy for them as well.

If you are familiar with module B2 The Keep on the Borderlands, you may recall the cool wilderness Gary Gygax described, which provided for a lizard man mound, giant spiders, a mad hermit, and a raider camp. Well, if you wanted to convert the adventure to DCC, The Vile Worm would be a good stand-in for the mad hermit.

In fact, I refuse to believe that this was unintentional, as The Treacherous Cobtraps maps well to the giant spiders in The Keep on the Borderlands, and The Ruins of Ramat can stand in for the lizard man mound.

Deep within the forest, an ancient oak has grown huge, twisted, and evil. Ages ago, a savage cult haunted these woods and this tree became the focus of their unspeakable rites. Below it they carved out a chamber of sacrificial horror where innocent victims were offered to a hideous worm-like god. As the centuries passed, the cult faded into the mists of time, but the twisted oak stood fast, awaiting the day when the creeping evil in the dark below would be summoned once more.

At the time of this writing, this product no longer appears for sale anywhere I can find.
Posted by ravencrowking at 07:01