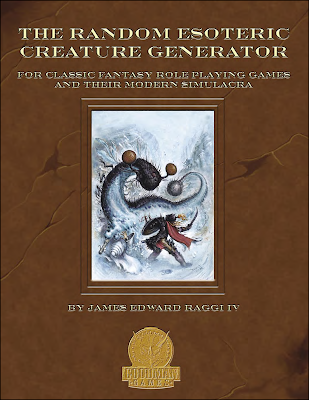 The Random Esoteric Creature Generator was not written for Dungeon Crawl Classics, but it gets an honorary listing as it is specifically mentioned in the core rulebook as a suitable tool for creating unique and mysterious monsters. It is certainly capable of doing so, and I have used it on several occasions to brainstorm creatures which could then be developed in DCC products. In fact, I keep a file of creatures generated from this (and other) sources to use as inspiration when the need strikes.

(I have also made use of The Metamorphica by Johnstone Metzger, and published by Red Box Vancouver, for similar purposes, but I find The Random Esoteric Creature Generator easier to use. See also The Monster Alphabet, the Monster Extractors, Monster Mod Cards, and the core rulebook itself for your creature generation needs! And I am sure that I have neglected more than one source of unique creatures in the foregoing list!)

Looking to instill a little fear in your game? Then look no further!

Nothing brings the thrill – and terror – of discovery to a game like new monsters. Faced with the unknown, mighty-thewed heroes tremble in their hauberks, wizened wizards fumble with their spell books, and even the most audacious of rogues hesitate before plunging into battle.

Nevermore worry that your players have memorized every monster’s stat, power and weakness. Nevermore resort to tired fantasy clichés, and worn out monsters fought a thousand times before. The Random Esoteric Creature Generator ensures that each monster your PCs cross is unique, unexpected, and best of all – unknown. With an unlimited number of horrific combinations, this is the last monster book you will ever need.

Bring terror back to the table with the Random Esoteric Creature Generator!