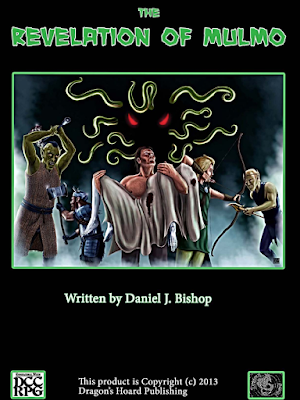 The Revelation of Mulmo is a 4th level adventure written by Daniel J. Bishop and illustrated by David Fisher. Cartography is by Tim Hartin of Paratime Design. The publisher is Dragon's Hoard Publishing.

Disclosure: I am the writer, and am credited with Layout and co-credited with Editing (along with David Fisher).

This adventure was written as a perk for the Indigogo campaign that brought about the original run of Angels, Daemons, and Beings Between. I have written about that elsewhere, and will not be going over old wounds here, but I will talk a little about how the project came about.

Specifically, the idea of an elf mound adventure arose from reading (or re-reading) Appendix N fiction. I also wanted an adventure that could potentially bring a dead PC back to life - it is coincidental that Harley Stroh's masterful Blades Against Death arrived half a year earlier, also was for 4th level characters, and also offered a way to Quest For It in order to beat death.

To say that this is a big adventure is an understatement. At the time it came out, it was the longest adventure for Dungeon Crawl Classics that was available. In order to make it as good as I possibly could, I ended up directly paying David Fisher for art above and beyond what the publisher could afford. I think that it was worth it, both in terms of the original presentation, and in terms of my continuing association with David Fisher and Shinobi 27 Games.

I have written about this adventure here.

What may not be immediately apparent is that there are references to various Appendix N elves worked throughout the adventure. Some are obvious; some are not. In fact, there is a reference to elves from every Appendix N work I had read at the time that included them. This, in turn, makes The Revelation of Mulmo especially connected to Angels, Daemons, and Beings Between Volume 2: Elfland Edition. I would be hard pressed, at this point, to list them all.

This adventure was also influenced by two adventures written by other authors, who deserve acknowledgment. The Tower of the Stargazer, by James Edward Raggi IV (Lamentations of the Flame Princess) has a telescope that can send you elsewhere; The Revelation of Mulmo has a telescope that can bring things from elsewhere to you. The Blasphemous Brewery of Pilz: Extra Stout Edition by Dylan Hartwell includes a "Sword of Inebriation" that gets more powerful based on the players (not the characters) drinking. This was an inspiration for Alemourn, the Drunken Blade.

Because Shinobi 27 Games obtained the rights to an expanded print version (The Revelation of Mulmo Tentacled Edition), the only pdf version available is through Dragon's Hoard Publishing.