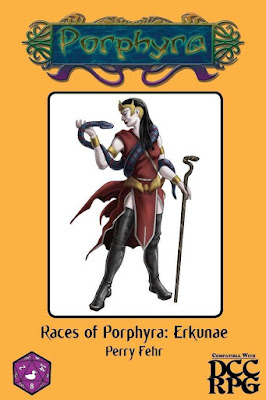 Disclosure: I have an Edits/Feedback credit on this product.

You are of an ancient, corrupted humanoid race with pointed features and pale skin, somewhere between elf and man. You have the taint of creatures from other dimensions in your blood. You hail from a bizarre city that covers most of a large island that was the center of a grand empire in ages past, but is now slowly sliding into decadence. You seek to prove yourself to the ancient powers of pure Chaos, which gave boons to your ancestors in the dawn of time. You are able to call on the primal forces of nature and Chaos, to achieve magical and military domination.

This product is based upon the existing canon of Porphyra, as written for Pathfinder, converting the original to a Dungeon Crawl Classics compatible race class. The erkunae are pledged to Chaos, and are particularly adept at summoning based on pacts made with various Animal Lords and promises made to beings of other worlds. In this, they are very similar to Michael Moorcock's Melnibonéans (which would seem to be a direct influence).

An appendix, Realms of Summoning, includes information on the subjects of various Animal Lords (Mrowra, Queen of Cats; Kannimorg, King of Bats, Bears, and Wolves; B’kakaaw, Queen of Birds; Sheytherax, Emperor of Reptiles; Biloop, King of Sealife; Moolineha, Queen of the Hooved; and Zezzberuiz, Queen of Insects). This appendix provides statistics for several new creatures, but has no further patron information on these entities.

The second part of the appendix, Summoned Monsters from the Myriad Worlds!, provides summoned creatures from the Age of Legends, the Cold-Blooded Empire, and the Dark Depths, as well as those who serve the Goblin King and the Death-Walkers. Again, some new monster statistics are provided.

Finally, the appendix includes Pledge to Chaos, a level 1 spell that acts as "the cornerstone of erkunae culture, the regularly renewed ritual that maintains their ancient, but constantly re-enforced pacts."

The product lacks a 0-level occupation table for erkunae, but otherwise provides everything you might need. The suggested use is that, "If a roll on Table 1-3: Occupation indicates a 34 (Elven Forester), 38 (Elven Sage), 69 (Hunter) or 90 (Squire), the player may choose to play an erkunae commoner", which seems reasonable enough to me. It should be noted that including the erkunae exactly as written presupposes some qualities of the world and the multiverse in which that world exists, but it shouldn't be too hard to either place the city of the erkunae somewhere in the world or eliminate it altogether. Nor dies Biloop need to be named Biloop. Likewise, Shevtherax may be one of many Animal Lords concerned with reptiles.

In the ancient mists of time the ancestors of the erkunae, neither elf nor man, made sorcerous and dire pacts with the Beast Elders of long ago, and promised their souls and the souls of the race, down through the eons to the capricious Lords of Chaos, unknowable beings of mercurial whim. With innate spells of summoning and controlling beasts and monsters, and gaining power through beseeching the Chaos Lords themselves, the erkunae ruled their sphere of influence for millennia.  Their influence has waned over the centuries, and today they mostly brood and squabble in their fantastic and warped Misty City of G’sho’laa’n’rr, which sprawls over an entire island.  But under the strength of a new Opal Throne Emperor, they could be great again!  The dragon-riders could fly once more to dominate the world…