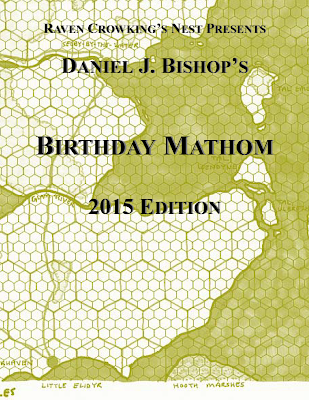 The post offering this item, and giving the requirements for receiving it, appeared on 28 July 2015. I provided a preview (the calot) here. I tried to drum up more interest here.

This year's mathom included twenty entries for Barsoomian creatures, a discussion of bringing your PCs to Barsoom, nine lunar creatures, and three entries for campaign worlds alien or mundane.

Terrestrials on Barsoom: A single page article that describes how characters are affected by moving from Earth to Barsoom.

Barsoom, as every Dungeon Crawl Classics player and Judge should know, is Edgar Rice Burroughs’ fantastic version of Mars. Transferring PCs from a terrestrial orb to Barsoom is as
easy as failing a saving throw in a cave, while Mars is appearing visibly through the open cave mouth, or having a TPK under the night sky. Instead of dying, the PCs feel drawn to the red planet, where their bodies (but not their armor, weapons, or other goods) appear unharmed.

Unfortunately, the last paragraph on page 1 is a holdover from the 2014 mathom, describing a creature in The Ruined Keep (the lurk).

For comparison, read Crawljammin’ on the Red Planet: a Barsoom Bestiary by Jon Hershberger, in The Gong Farmer's Almanac 2016 Vol 6.

Some Creatures From the Moon!: Creatures from These creatures, from The Revelation of Mulmo, which were marked as Open Gaming Content in that product. As noted in the mathom, "some of the description of the Invisible Lunar Creature, and none of the description of the Fungal Wasp Swarm, is in Area T8, although it is referred to, so caveat emptor...although the intent was to have these OGC. The others are completely and utterly in the clear! Please use them!"

Parting Shots: This was three additional creatures: The Ironroach Swarm (which later appeared in The Gong Farmer's Almanac 2016 Vol 3), the Siren Bush, and the Trusk (which may be related to the anvar of The Dread God Al-Khazadar).

This product is no longer available, although, as indicated above, some of the content is.
Posted by ravencrowking at 12:37