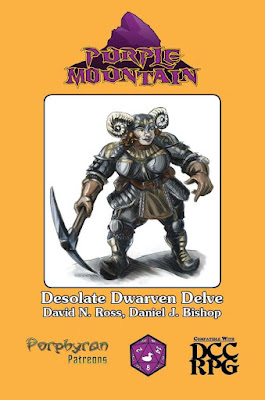 Purple Mountain was originally written for Pathfinder role-playing game, and is nominally within the Purple Duck Games open setting, Porphyra. Each level was written by a different author (although some authors may have written more than one level), using cartography by Kristian Richards.

The second level of Purple Mountain is an abandoned dwarven mine, which is now home to gremlins, un-dead dwarves, a troglodyte hermit, and various other creatures, including more than one type of fungi.

As with all adventures in this series, the module can be used as a stand-alone adventure, or as part of the larger Purple Mountain series. The entrance to this level presents its own difficulties, and foolish or unwary players may well lose a character (or two) here.

This level played heavily into Pathfinder sensibilities in its initial incarnation, which required some serious thinking to convert it to Dungeon Crawl Classics. Specifically, reducing the feeling of playing Pathfinder while retaining the essential narrative of the adventure was challenging. On the other hand, most of the monsters are essentially similar to their original counterparts, with Hassur the troglodyte hermit and his ally Pallcap requiring the most change. On the other hand, I did get to work in a connection to Ulibex from Silent Nightfall.

Purple Mountain II: Desolate Dwarven Delve throws your party into a ruined dwarven settlement haunted by the restless dead, insidious fungi, sadistic fey, and more. Devious mechanisms bar the way and the delve's strange, feuding inhabitants loom on all sides while the party search for the valuable secrets of the ruins.

The Purple Mountain series is designed to be a classic mega-dungeon. You know the kind...