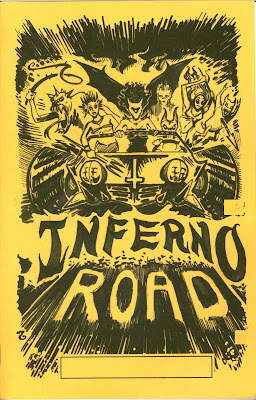 Inferno Road was written by Wayne Snyder, and perhaps some others who are not as clearly indicated as writers in the credits. Art is by Doug Kovacs and Wayne Snyder. Other people involved include Jarett Crader, Harley Stroh, Reece Carter, Jason Bossert, Meredith Spearman, Jim Skatch, Terra Frank, and James MacGeorge. No publisher is given.

So what do we have here? Another bit of hooliganism akin to Country Crawl Classics, where your PCs begin play as grubs in hell, aboard various strange vehicles, trying to steal the Devil's wives on Inferno Road.

All PCs have two past lives, which they can access to manifest stuff related to those past lives. All PCs have a Prince of Hell as a patron. PC grubs become subgrubs when killed, and can be consumed as though they were souls. Consuming souls makes you stronger, and can allow you to take on demonic forms.  Or you can burn souls like you burn Luck. If you fall off the convey, a "dreg wagon" coming behind scoops you up and shoots you back into the game.

Apart from that, everything is art and detail, until you realize that there is no way to win, no way to lose, and the end is just going to be walking away from the table. Like Sisyphus pushing his boulder, your PCs are trapped in an endless loop of Inferno Road. In a way, this is as nihilistic as Null Singularity or Black Sun Deathcrawl. You just might not notice that right away because you're having too much fun.

Nonetheless, there is some usuable stuff here for a more mainstream Dungeon Crawl Classics game. The Random Vehicle Generator can be used to create things for hell gangs across Umerica or the future of Mutant Crawl Classics, for instance, and the demonic forms could be things your PCs end up fighting on a remote volcanic island.

Another real possibility (and one that I favor) would be to run Inferno Road after a TPK, where each PC has one previous life as a recently-deceased party member (not necessarily with the same player), and one randomly rolled past life. The PCs then have to simply find a way to escape the scenario (which the players will have to devise, and the judge rule on, because the product certainly doesn't include one). Escaping the scenario is the first step to fighting their way out of hell...perhaps in demonic forms, or perhaps taking human guise once they reach the world of the living.

The roars of the betrayed Dark Lords shake the foundations of hell. The Grand Architect of Evil is enraged. Satan shakes his chains and the whole of hell shakes with him.

Above you on the black cliffs stands your master, a black prince of hell. The beast thrusts its arms into the sulfurous air and howls along with its lord and master.

The ground shudders and your pit boils and froths. You and your ilk are cast up in a great hissing geyser. There is a terrible shriek and a thunderous flap of leathery wings as you are snatched from the air in the stone talons of some horror made of lies and murder. Thou sound of your master's mocking laughter echoes as you are borne away.

I have no idea how you can obtain this item, unless you manage to track down one of the miscreants responsible for it at a convention and pass your Luck check. EDIT: You can contact Doug Kovacs or Wayne Snyder to get on their list for the next printing.