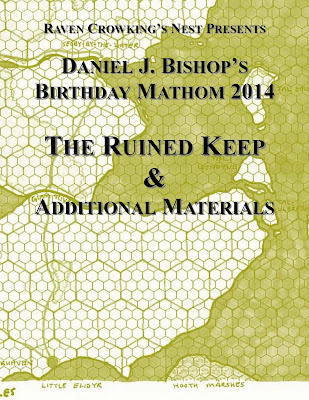 The post offering this item, and giving the requirements for receiving it, appeared on 29 July 2014. As I said in that post, "These are just some fun things that you can get for free because sending them out helps me celebrate the passing of another solar rotation. And because the DCC community is great."

The Ruined Keep: This is one of two scenarios originally written for Raven Crowking’s Fantasy Game (RCFG), the “fantasy heartbreaker” I was writing before I switched to Dungeon Crawl Classics. I converted it to be used as a funnel for 12-18 0-level characters or 1st level adventure for 4-6 PCs.

Somewhere beneath the ruined keep lies the Oracle of the Crystal Grotto. The judge need only allow the PCs to learn this, and give the PCs some question that they need to answer, to hook them into the scenario.

If running a 0-level funnel, the PCs’ village may be suffering from an incurable plague, with the Oracle being the only hope of succor. If the PCs are in the early stages of the plague themselves, it will lend a certain piquancy to their mission.

This adventure was reprinted in the Sanctum Secorum Episode #31 Companion: Jack of Shadows.

Bonus Material from Appendix N Authors: This material was compiled from various Appendix N sources and given DCC statistics. Included are:


I have given Bob Brinkman blanket permission to use almost everything in this mathom for Sanctum Secorum Companion volumes, so hopefully these will appear in a The Wind Whales of Ishmael volume at some point.

Additional Monsters: Dungeon Crawl Classics statistics for the behir, blindheim, hippocampus, and wyvern, using alterations I had made to the creatures for RCFG.

This product is no longer available, although, as indicated above, some of the content is.
Posted by ravencrowking at 12:00