The Revelation of Mulmo Tentacled Edition 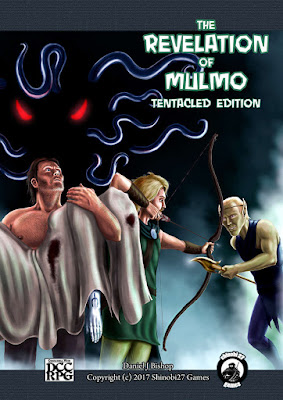 The Revelation of Mulmo Tentacled Edition is a 4th level adventure written by Daniel J. Bishop and illustrated by David Fisher. Cartography is by David Fisher and Tim Hartin of Paratime Design. The publisher is Shinobi 27 Games.

Disclosure: I am the author and have an editing credit.

There is another version of this adventure, released by Dragon's Hoard Publishing. So what is the difference?

The most obvious difference is that the Tentacled Edition is in print. In addition, David Fisher is a better layout designer than I, and layout is consequently much improved. There is some additional editing for clarity. There is also some new art and a bit of new cartography. Finally, there were three partial patrons in the original (Gloriana, Faerie Godmother; Mab, Dark Queen of Faerie; and Mulmo, He Who Whispers Forgotten Secrets), two of whoM (Gloriana and Mulmo) appeared fully fleshed out for the first time.

On the other hand, the original version included all of the additional patron information you might need to run the adventure, because I did not assume that the judge would have access to Angels, Daemons, and Beings Between (or have access to it at the table).

A video review of this adventure is available here.

Death comes to us all….But what price are you willing to pay to bring back one you have lost?

In The Revelation of Mulmo: Tentacle Edition, brave adventures risk magic, monsters, and the passage of time itself to bring a fallen comrade back from the dead.

This module describes a fallen elf hill, with descriptions of 60 locations, additional patron information, and FOUR new spells. It makes use of patron information from the DCC RPG Rulebook and Angels, Daemons, & Beings Between: Extended, Otherworldly Edition by Shinobi 27 Games.

If you are wondering how to make patrons more active in your campaign, this is the adventure for you!