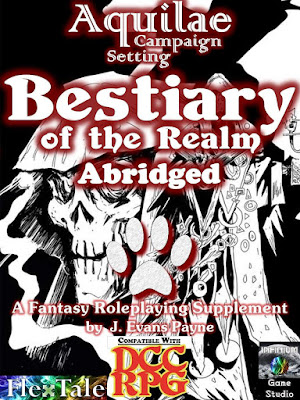 Aquilae: Bestiary of the Realm Abridged (DCC/Dungeon Crawl Classics) was written by J. Evans Payne. Art is by Jack Kaiser (including cover), Karen Martin, and J. Payne (iconography and cartography). The publisher is Infinium Game Studios.

What we have here is a massive - and I do mean massive - number of creatures converted from Pathfinder to the Dungeon Crawl Classics system. This thing has over 400 pages, with over 400 entries, each of which has four separate stat blocks depending upon the power level the judge needs. To say that this is a monumental undertaking is to utterly understate the case.

This is the Abridged version for DCC, so it only contains DCC stats and has fewer monsters than the full version. Apart from a few minor quibbles - DCC has Stamina, not Constitution! - the book is mechanically sound. My issues with the Content Conversion Guide apply here as well. Crom on His Mountain, I don't want Pathfinder Conditions and its Action economy in my DCC game, although I do see the value in understanding how it might apply.

In the end, this book is going to give you a good starting place for your own conversion work. If you take the entry for, say, Bear (Grizzly), you could rule that the average bear used the Moderate Quad, that a black bear used the Low Quad, a polar bear was Advanced, and something truly horrendous (and, effectively a named monster) was based off of the Elite Quad. In this way, you could use the Quad System while maintaining the type of milieu persistence that changing stats to reflect PC abilities destroys. 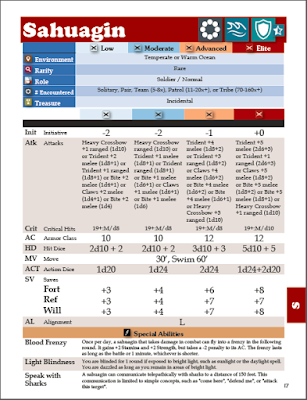 As with the Content Conversion Guide, I am breaking tradition by including an interior shot, so that the reader may compare the author's statistics for Sahuagin with my own.

One of the stated goals of the Auilae project was to create an authoritative source for conversion. While the tools supplied are valuable, I would strongly urge the prospective judge to reject this goal. For one thing, if there were an authoritative source for DCC statblocks, it would be the core rulebook, and in several cases monsters appear differently herein. More importantly, when he penned the immortal words "Make Monsters Mysterious", Joseph Goodman pushed away forever the idea that one judge's idea of a lamia must (or even should) match that of another. And that is a very good thing.

In effect, this is a very useful start for converting material, but it should not be the end. When you do use monsters from here, strongly consider altering them to reflect the tone of DCC. How would this being appear if presented in an Appendix N story? What about an adventure by Michael Curtis, Harley Stroh, Joseph Goodman, or Brendan LaSalle? I would also suggest that, rather than converting dragons or demons directly, you consider building them anew from the tables in the Dungeon Crawl Classics core rulebook.

Well, that gets you through as far as the "D"s anyway. The discerning judge will notice that there is plenty of overlap with monsters already published for DCC. In other cases, DCC-specific resources (such as The Lesser Key to the Celestial Legion for angels and other divine servants) might bring more satisfying results. The judge is also warned that these are only statistic; if you do not know what a Dullahan is, you will need to look it up elsewhere.

The sales test on DriveThru says "Add to this a thoroughly innovative and massively expandable AI system to guide monster behavior, and you have what just might be the most impressive and valuable creature resource ever to hit Pathfinder, 5E, Pathfinder Second Edition, OSR, and DCC." but I do not see any system like that in this product.

Again, the judge may find this product quite useful when starting on the journey of converting materials to Dungeon Crawl Classics. I would caution that judge to consider it guidance at the start of that journey, however, rather than an end in and of itself. If you have enough time to consult this volume, you probably also have enough time to use it as a springboard rather than stopping with what you find.