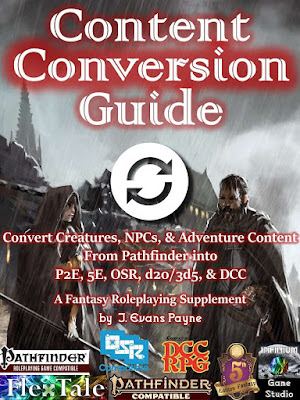 The Content Conversion Guide (Pathfinder/5E/P2E/OSR/DCC/d20 3.5) was written by J. Evans Payne. Art is by Jack Kaiser (including cover), Karen Martin, and J. Payne (iconography). The publisher is Infinium Game Studios.

If you own a lot of material for role-playing games, and the game you are using has changed over the years, who would not want to convert material from one system to another? Why would you not want to use The Keep on the Borderlands, Castle Whiterock, or Hungry Are The Dead using Dungeon Crawl Classics? I have discussed this in the past myself. This product offers a streamlined way to do that.

The author has clearly put a lot of work into this, and it does provide a good starting place for people who want a mechanical way to convert various games into Dungeon Crawl Classics. But, I have some reservations here. I tend to think that, if you take these reservations into account, you will be able to make better use of the tools provided herein.

(For those who want qualifications, I did the official conversions of DCC #76.5: Well of the Worm, DCC #79.5: Tower of the Black Pearl, DCC #82.5: Dragora's Dungeon, DCC #85.5: The Curse of the Kingspire, the GM Gems Hardcover Second Printing, Xcrawl: Anaheim Crawl, Xcrawl: BostonCrawl, and Xcrawl: Dungeonbattle Brooklyn for Goodman Games. I also did the conversions of PM 1: Temple of the Locust Lord, PM 2: Desolate Dwarven Delve, Races of Porphyra: Erkunae, and Races of Porphyra: Ith'n Ya'roo for Purple Duck Games.)

Apart from some quibbles, the mechanical conversion is sound. This assumes, however, that what you want is roughly the same experience of an encounter, translated from one system to another. I do not think that this is ideal. For instance, in converting more powerful monsters from 3.X-based OGL versions of the critter, I typically reduce their Hit Dice. Frankly, one of the reasons that I left 3rd Edition Dungeons & Dragons for Dungeon Crawl Classics is that I don't want a single battle to drag on past the point where it is interesting. For a similar reason, I don't bother listing all of the abilities of a creature, and try to focus on its core abilities that will be useful in a given adventure. For the most part, this conversion system does the same.

Here are my reservations:

(1) I am fundamentally opposed to the idea of altering creatures to meet the abilities of characters. I am not opposed to altering a creature to meet the needs of an adventure, and I would contend that there is a subtle but distinct difference. In a game like Dungeon Crawl Classics, there is a baseline set by the 0-level funnel and by constants in the world. Things like Armor Class, or the DCs for thieve's skills, do not change - the PCs just become better as they level. The "average person" standard set in the funnel can be used to reflect the entire world. A 3rd-level warrior is fantastic judged by that standard. 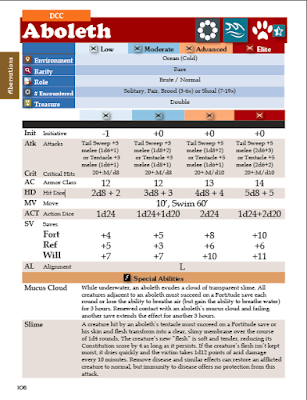 When creatures meet the needs of the adventure, that standard can be maintained. When creatures alter to allow, say, an orc to be challenging at any level, then orcs are no longer tied to an objective standard.

(2) One of the truly wonderful things about Dungeon Crawl Classics is the advice to Make Monsters Mysterious, and to decouple monsters from the treasure that they carry. This volume will not help you with that.

For a great example of what I mean, think about the listing for Skeleton in the core rulebook. It doesn't just describe a single creature; it gives you a table of variants for that creature. Similar things occur with many other creatures.

On top of this, many DCC creatures cleave closer to their Appendix N sources. DCC trolls and Pathfinder trolls are not the same creatures. Related to that, the idea that "That was a tough encounter! There must be a big treasure!" cheapens (for me, at least) the feeling of discovery in the game as well as harming immersion.

In any event, you are not going to Make Monsters Mysterious by picking them from a menu.

(3) Related to this, I have argued in the past that DCC needs both mysterious creatures and persistent creatures.

Consider again the way the goblins, wolves, and eagles are used in The Hobbit.  They are not simply “throw away” creatures that appear in one chapter so that the creatures in the next chapter may be unique.  And all appear again in The Lord of the Rings.  Each of these volumes also has unique creatures which are encountered only in specific locations.

A persistent world needs persistent creatures; and Appendix N worlds also needs unique creatures.  The best of all possible worlds has both.  Horses, dogs, wolves, chickens, and pigs are certainly ubiquitous.  That Conan encounters lions in The Tower of the Elephant should not imply that there are no lions elsewhere in the world – quite the opposite, actually – but encountering Yag within the Tower should remain a unique occurrence.

New creatures allow for surprise, fear, and wonder.  Known creatures give a world depth, and allow choices to be made within a familiar context.  The discerning Judge will have to learn where to draw the line between the two.

This is further explicated in this post.
One of the advantages of long-term play in a persistent milieu is that you get to learn about that milieu through play. You may not know if fighting jackalmen is a good idea when you first encounter them, but you should have a fairly good idea about how powerful the average jackalman is by the time you have reached 3rd level and encountered them regularly.
The Quad System makes this impossible, because the abilities of the jackalmen now change with your abilities. In short, they lose the value of being persistent creatures because, mechanically, they are no longer persistent.

(4)  One of the key draws of Dungeon Crawl Classics is how cleanly and quickly it plays. Another is that you can find yourself in over your head at any moment. Adding Conditions and Challenge Ratings to the game harms these key strengths.

Nonetheless, taken as a starting point, this volume does have merit. And, as I said, it represents a considerable amount of work on the part of the author. This is the first time that I have ever included a second image, or an interior image, in a Treasure Trove entry. I have done this to give the reader a good idea of the kind of conversion this product provides. This is especially useful, in this case, because it can be compared to my own conversion of the Aboleth to DCC.

This product does have a very generous OGL, which, if my reading is correct, would allow one to use it to create publishable conversions. The product rightly notes that there is both an art and a science to conversion. This will undoubtedly help you with the science. I tend to fall on the side of the art.

If you've ever wanted to take adventure content from one system and use it in another, this book has been designed to be of invaluable help.

For D/GM/judge/referees, for game designers, for indie RPG authors, or for someone looking to investigate the mechanics of other TTRPG rules systems, this book is designed to be a massive accelerant to the conversion process and a window into the "secret sauce" that has made Infinium Game Studios products unique in their ability to be used across a wide variety of PC levels and difficulties.