The Palace of Unquiet Repose 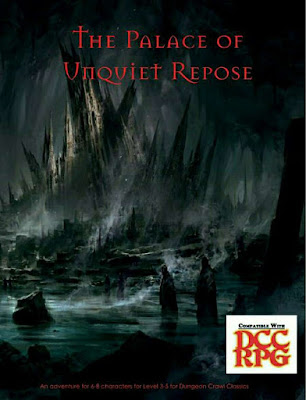 The Palace of Unquiet Repose is a 3rd level adventure by Prince of Nothing. Art is by Malrex (including mapping), Chris Cold (including cover), Eray Erkoc, Gilgangarmi, James Vail, and "Anonymous Donor" (also mapping). The publisher is The Merciless Merchants.

This product is the product of a successful Kickstarter that I somehow did not discover or back. It was originally written for Labyrinth Lord, with the DCC version seemingly having come about because they blew past their funding goals and took a poll for which additional system to convert it to.

The DCC conversion is clunky in places. I recommend that the experienced judge go through this with care, adjusting statistics and effects to better reflect the system. If you are less familiar with DCC, but conversant with other OSR games, you can probably make adjustments on the fly where needed. Just port in the rules you need when you need them.

Whether you are fully conversant with DCC or not, you will want to read this adventure through before you try to run it. There are a lot of moving parts, and there are several instances where you will want to be certain that you know how you are going to present areas to the PCs. There is no descriptive text, which is probably a good thing with this adventure, but there are places where more description would help.

There is also a lot of treasure in here, so I would strongly caution the judge to dial back the gold piece values of things to about 10% of listed value. Even so, PCs could be fabulously wealthy when they leave the Palace. If they leave it at all. This is not just a TPK waiting to happen, it is several sequential TPKs.

If the foregoing makes it sound as though this adventure should be skipped, please accept my most sincere apologies. Running this well is going to be a challenge, but it is also going to be awesome for everyone involved. Although it nominally takes place in the Age of Dusk campaign setting, this can easily by altered by the judge. The Age of Dusk sounds like it falls somewhere between Zothique and the Dying Earth, albeit darker, though, so I would certainly be interested in learning more about the setting. The adventure doesn't just evoke a Sword & Sorcery feeling; it screams it from the rooftops until its voice is hoarse. To say that it is worth the effort to run it is a tremendous understatement.

The adventure is a relatively recent one, and I really don't want to spoil it for potential players or judges. I will say that I was intrigued reading the Adventure Hooks, loved the journey across the Glass Wastes, and then jumped into the Appendixes to better understand the adventure location proper. By this time I was well and truly hooked. Discretion is sometimes the better part of valor, and, if your players understand that they can do quite well. Or not. I would personally place this adventure as a persistent location that "activates" when the PCs are in the vicinity of the Glass Wastes and have reached the appropriate level. 4th and 5th level PCs will also find this a challenge, in my opinion, so I would be glad to let the area develop over time.

Let me add that when I was reading this I kept imagining Conan and other Pulp-Age heroes from Appendix N dealing with the encounters and scenarios in the module. There are factions to negotiate with, make alliances with, or oppose. Their are some great monsters who are truly monstrous. There are things that the PCs probably can't kill. There are also plenty of things to kill, and the best "owlbears" I have ever encountered. And the Wolves of Final Night? Every player deserved to encounter one at least once, and thereafter the mere mention will induce panic. As much as I wish the DCC conversion was more professionally completed, there is material herein that I very much wish I had written.

The adventure also contains two complete patrons (including invoke patron results, patron taint, spellburn, and patron spells) which are actually relevant to the adventure: The Tesseract Tree and Uyu-Yadmogh.

Uyu-Yadmogh. Prince of Princes. Archmage. Devourer of Children. Under the earth he built himself a palace in which he could abide eternity. Now he is only half-remembered legend.

The ground trembles, the earth is split asunder. In the sunken depths of the earth, the Palace awaits.

An adventure for those who dare.