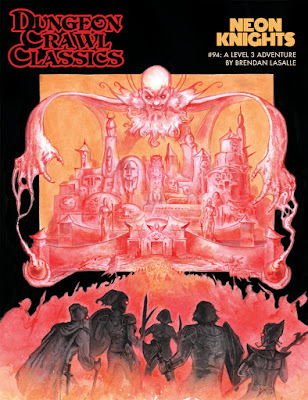 DCC #94: Neon Knights, is a 3rd level adventure written by Brendan LaSalle with art by Doug Kovacs (including cover and cartography), Friedrich Haas, Cliff Kurowski, William McAusland, and Chad Sergesketter. The Publisher is Goodman Games. This book is dedicated to Paul Suda, an actor and writer working on the Xcrawl movie currently in development.

Disclosure: I have a playtest credit on this product. Also, the author sent me a signed copy.

I was lucky enough to meet Brendan LaSalle at Nexus Game Fair in 2016. This was not actually an accident, because I decided to see what conventions I might be able to attend during a trip to Wisconsin to visit family members. I was, quite specifically, looking for somewhere I could get into a DCC game, and I recognized Brendan LaSalle from his work with Goodman Games. In fact, by that time I had appeared in the DCC RPG/Xcrawl Free RPG Day 2013 offering from Goodman Games with him, and converted two of his Xcrawl adventures to DCC mechanics: Dungeonbattle Brooklyn and BostonCrawl!

The upshot of this was that, not only did I get to be a playtester for Neon Knights, but I got to generally pal around with one of the most generous, outgoing, and gonzo judges I have ever met.

Neon Knights is, of course, inspired by Black Sabbath, as is Hole in the Sky. As written, Neon Knights links directly to the Purple Planet from Peril on the Purple Planet, but this connection can easily be altered by the judge to allow the adventure to bring the PCs elsewhere.

Brendan LaSalle's DCC work is a sort of an energetic high fantasy extravaganza. I don't mean high fantasy as being Tolkien-esque, but rather dealing with epic themes that cross the planes of existence. Although Michael Moorcock is not a direct influence to this adventure (in any way that I can tell), those who like Moorcock's work are likely to find resonance here.

Ten thousand flawless killers surround the city. Utterly silent in battle and in death, they seem unconquerable. They mean to choke the life out of the age-old city and leave it an empty ruin.

The city calls upon its heroes to defeat this unnatural menace. The heroes gather to ponder the question: how do you defeat an impregnable foe?

And then a wizard from a far-off world whisks the heroes away to fight battle of a very different sort, leaving them with a strange neon pink glow around their eyes…