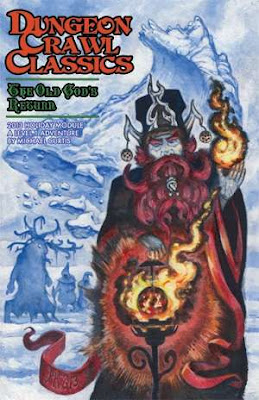 The Old God's Return is a level 1 adventure by Michael Curtis and the 2013 Holiday Module by Goodman Games. Art is by Doug Kovacs (including cover and cartography) and Stefan Poag. The publisher is Goodman Games.

This is a fantastic adventure, which fits well with the Frozen North setting described in the expanded printing of Frozen in Time. The adventure-specific inclusion of sovereign fire lends the proceedings a unique resource that the players must manage...and mismanagement can have dire consequences!

I ran this shortly after its release, and the group had a great time. The adventure is not long - it can easily be run in a four-hour convention slot - and the holiday themes don't overwhelm play at the table. If you ran this in July, the players might not even get the Yuletide references for what they are, so don't mistake this adventure as a "seasonal-only" excursion. The events, challenges, and outcomes are all serious indeed.

Nothing in The Old God's Return is played for laughs. It is quite possible for the PCs to "win" and then plunge to their deaths, and it was only quick thinking that prevented such an outcome at my table.

Although describes as "an excellent one-shot to play during the winter holidays", I would recommend weaving this adventure into an ongoing campaign. There is, quite simply, too much good material here not to revisit it. The Old God, Tjaptar, then becomes one of those fearful things haunting the boreal forests of the North. His minions are definitely worth including in future adventures in regions where the Hyperboreans once held sway.

My group also really enjoyed the imagery in adventure, some of which is more than slightly creepy (trees containing the essence of stolen children, I'm looking at you). Seriously, while this adventure is seasonal, it is not "simply" seasonal. Overlook it at your peril.

Knives glinting in the moonlight.

A frigid mountain drifting in the sky.

These ominous events attend the return of an evil long forgotten by Man. On the night of the winter solstice, when the world is balanced on a knife’s edge in the battle between fire and ice, a slumbering deity awakes. Now, only those heroes chosen as the champions of the Lord of Flickering Flames can end this growing threat before it reclaims its former malevolence and reminds the world why the old forests are places to be feared…

A Note About Holiday Modules: In December of 2012, I released an unofficial, free, holiday adventure called The Thing in the Chimney. In 2013, I wrote a sequel, The Nexus of Yule, and the two adventures were packaged together as The Perils of Cinder Claws and released by Purple Duck Games. I would like to think that there is some connection between my release in 2012 and Goodman Games' decision to start a series of holiday-themed releases in 2013, but I don't know for certain if that is the case. In any event, they could hardly have devised a stronger opening to a line which now includes not only the Winter Solstice but also Halloween!