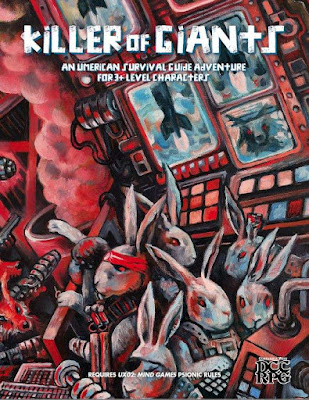 Killer of Giants is a 3rd level Umerican Survival Guide adventure by Forrest Aguirre, with artwork by Nate Marcel and cartography by Tomas Gile. The publisher is Shield of Faith Studios.

Disclosure: This was a stretch goal on the successful The Umerican Survival Guide Kickstarter, which I backed.

This is a new product at the time of this writing, so I want to avoid spoilers in this listing. What I can say, though, is this: There are so many ways to die. So many ways to die. Incautious, foolish, or just unlucky adventurers will end their Umerican existence here. You have been warned.

This adventure describes itself as a "point crawl", which, in this case means that it is what we older gamers used to refer to as an adventure location. There is no set plot, just a lot of things to interact with, and which can interact with each other. This somewhat ameliorates the lethalness of some of these encounters - the players do not need to tackle everything at once.

The other ameliorating point is that, well, those lethal encounters are dramatic and/or funny. Your beloved characters may die, but it will be crazy and enjoyable while it lasts.

Because this adventure makes use of an opportunity - everyone knows about the Base, but has been unable to breach its security before now - it behooves the prospective judge to purchase the adventure before he needs it, and make sure that the PCs do know about the location right from the start.

There are some issues with this adventure that you are going to have to deal with if you run it. These are not insurmountable, but it is important to be aware of them:


If you were thinking to yourself, "Just how crazy can things get in post-Apocalyptic Umerica?", then Killer of Giants offers a fun answer. There are plenty of references to genre inspirations, be they literary, television, or film. As the author is a host on the Glowburn podcast, I cannot believe that these are accidental.

It should also be noted that, with a little work, this adventure could be converted to Mutant Crawl Classics.

The protections surrounding an ancient military base, home to the fabled “Killer of Giants”, are down! The denizens of Umerica have flocked to the base to grab what they can and establish dominance over this post-apocalyptic treasure trove. Why let everyone else have all the fun?