PM 1: Temple of the Locust Lord 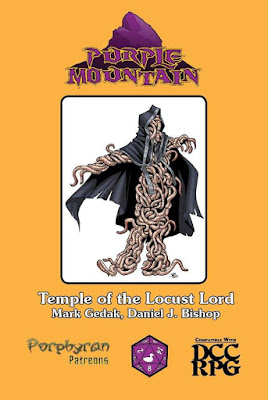 Purple Mountain Level One: Temple of the Locust Lord is a 1st level adventure written by Mark Gedak. Art is by Jacob Blackmon (cover) and Matt Morrow. Cartography is by Kristian Richards. DCC conversion is by Daniel J. Bishop. The publisher is Purple Duck Games.

Purple Mountain was originally written for the Pathfinder role-playing game, and is nominally within the Purple Duck Games open setting world, Porphyra. Each level was written by a different author (although some authors may have written more than one level), using cartography by Kristian Richards.

Each level also has a theme, and the theme of Level One is insects, arthropods, and similar squicky things - what are called "vermin" in the original system. It is important in doing a conversion to try to be true to the overall vision of the original author, while ensuring that the aesthetic of Dungeon Crawl Classics shines through. This means, in part, making monsters mysterious, even to those who are old hands at Pathfinder. Luckily, Mark Gedak's original work made this fairly easy to do.

Notes are given for using this product as a stand-alone adventure, or as part of the larger Purple Mountain series. An Appendix describes the Locust Lord as a deity for clerics and provides invoke patron results for wizards and elves.

The first level of Purple Mountain is the current home to a cult of the Locust Lord, a demonic entity dedicated to vermin, chasms, and infestations. Twenty years ago, the wizard Iraksed came to the Purple Mountain to discover secrets of transformation into an immortal invertebrate form. His destructive tendencies and ability to manipulate the manamites present in the first level of Purple Mountain earned him the grace of the Locust Lord and Iraksed began the painful process of shedding his mortal form into his current squirming one.

Recently Iraksed and his manamite followers have grown in power and potential for destruction. The manamites have captured and trained a number of vermin, including a throach. The throach, known to the manamites as the Instrument of the Locust Lord, has the ability to implant hosts with its verminous offspring. These offspring eventually tear themselves free of their host. The manamites love both the birth of throach grubs from within the bodies of other sentient races and the screams of their hosts as the larval throach burst free. To supply the throach with a constant supply of hosts, the manamites occasionally venture out of Purple Mountain to capture travellers or nearby villagers.