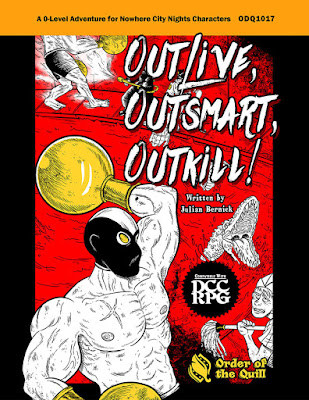 Outlive, Outsmart, Outkill! is a 0-level funnel adventure written by Julian Bernick. Art is by Spencer Amundsen and Jack Kotz. The publisher is Order of the Quill.

This is the first stand-alone published adventure for Nowhere City Nights. The irony of the first adventure for this setting being a funnel came up on Spellburn, where Julian Bernick is one of the hosts.

Remember the good old days? Nah… Nowhere City never had any good old days, no matter what the politicians say. It’s always been a hellish cult-infested battleground contested by the power-mad forces of Chaos and the few, desperate defenders of Law. And this conflict comes with bloodshed, heroics, vile sorcery and plenty of NPCs who are meant to be killed. We hope you enjoy your stay. After all, we heard the roads and the airport just closed down due to a mysterious state of emergency.

This is a new adventure, so I want to be careful about spoilers beyond those supplied by the publisher. Suffice it to say that if you are looking for a dark, noir version of DCC Xcrawl to play as a 0-level funnel, you have come to the right place.

It is not a spoiler to say that the section entitled Ending the Adventure gives options for both "...and Starting a Campaign" and "...in a Convention or Short-term Game". The ending of Outlive, Outsmart, Outkill! supplies a good starting point if you are moving into a campaign, or a good ending point if not. A funnel adventure has to answer the question "Why did these people stop farming turnips?" (or, in this case, doing paperwork!), and Outlive, Outsmart, Outkill! certainly does that.

Appendix A provides a table of 100 quirks that you can use to help define your Nowhere City Nights 0-level characters. Some of these would be quite fun to use in a game session; others might actually change the nature of play. It would actually be more interesting to have a Strength 5 character roll "60: Weightlifter" than a character with a 16+ Strength. And if you roll 100? Let's save that for as a surprise, but the judge and player will probably need a private consultation.

Outlive, Outsmart, Outkill! is a mad parody of today's cynical reality TV world. You want sadism, isolation and high stakes betrayal? In Nowhere City, you can take it all the way. The elite sorcerers of Scutigera have abducted a random assortment of civilians and forced them to compete in this lethal contest... while they watch. There's no fame and money at stake and there's no second place. In this contest, the winner gets to join the Sorcerer Cult-- and everyone else DIES!