The People of the Pit 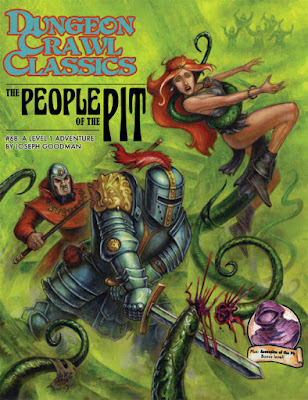 DCC# 68: The People of the Pit is a 1st level adventure by Joseph Goodman. Art is by Jeff Easley, Jim Holloway, Doug Kovacs (including cover and cartography), Russ Nicholson, and Stephen Poag. The publisher is Goodman Games. The 2nd Printing includes Assassins of the Pit, by Daniel J. Bishop, with cartography by Steve Crompton.

Disclosure: I am the author of Assassins of the Pit.

The A. Merritt story, and this adventure, were discussed on the Sanctum Secorum podcast.

This was the third adventure published specifically for the Dungeon Crawl Classics role-playing game, if one does not count those reprinted in the core rulebook. As such, it exemplifies what the early vision of DCC adventures looked like, through the game's author's lens...and it still holds up remarkably well today.

I am not sure if the standard cover of the core rulebook was based off this adventure, or if this adventure was inspired in part by Doug Kovacs' imagery, but it is hard not to see a connection. Your characters travel down a broken stairway into a misty pit to confront a terrible cult of once-human creatures.

This was a fun adventure to run. In preparation, I made several extra copies of the player handout maze. My group really enjoyed this aspect of the adventure, and I made them redraw their route each time they used it, until it was mastered. For those of you who have read The Chronicles of Amber by Roger Zelazny will get a nice moment of frisson here. There is also an encounter that may remind players and/or judge of L. Sprague De Camp's The Fallible Fiend and/or Michael Moorcock's The Vanishing Tower.

The climax is suitably climactic, on the scale of many stories in the Appendix N canon. When I ran this, one of my player's PCs was caught in the climactic event. The remaining PCs worked their way to the bottom of the Pit, where they managed to successfully recover the body. I was, perhaps, too lenient a judge in not having the fallen PC be covered by tons of rubble, but a great time was had by all.

One thing I had noted when running the adventure is that the octo-masses (produced as death throes by the cultists, in a manner similar to the death throes of the ghouls in Doom of the Savage Kings) seemed rather pointless after the initial shock of their appearance wore off. When I was contacted by Joseph Goodman to write a short addition for the 2nd printing of the adventure, I tried to rectify this. In Assassins of the Pit, the purpose of the octo-masses is explored.

It has been years since the last virgin was sacrificed: and now the pit beast awakens once more! Every generation it stumbles forth on undulating tentacles from its resting place deep below the great ravine, its towering blubbery mass ravaging the land before returning to slumber for decades. But this time is different. The Great Beast strikes with intelligence: bands of faceless gray-robed men emerge from the tenebrous depths, herding the beast’s roaming tentacles before them. The enigmatic people of the pit live despite the passage of ages! The earth shakes each night as they herd the primordial tentacles ever further, while the villagers ask: is any man brave enough to put the sword to this menace?