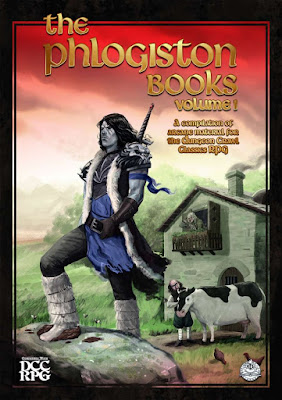 Other Selves is a Madrid-based role-playing game publisher, which has translated several Dungeon Crawl Classics to the Spanish language. The Phlogiston Books is sort of like their "house zine", except it is perfect bound and 62 pages as a pdf, so a bit more than a zine!

Appendix Ñ: The editors explain that this issue deals largely with rural themes. We learn that Ñ is the 15th letter of the Spanish alphabet (sounding like gn, and used in words like España - or Spain in English). (And, obviously, if you speak Spanish you did not just learn this!) Either way, this is nice because it reminds you that, while the roots of The Phlogiston Books is the literary inheritance of Appendix N, it is not completely the Appendix N of North American authors.

We also learn of an upcoming adventure, The Wandering Vaudeville of Earthly Pleasures, which I hope one day to see in print.

The Gallows Tree: Author Gabriel García-Soto offers a rather unique an interesting patron, complete including one 3rd level spell and notes for 1st and 2nd level spells (which are slight modifications to materials found in the core rulebook).

"As time passes and more executions take place, some of these trees become infected by death, adopting grim features and swaying their branches in the wind as if they were the limp fingers of those punished there."

This is really nice stuff, well realized, that could fit into almost any campaign world.

The Cultist: A new character class by José Manuel Sánchez García, something like a fanatical cleric, but whose power comes from a patron. Because of the hidden nature of cults, some thief-type skills apply. And there is a mechanic to force you to convert others.

This can easily fit in a game with clerics, and neither will step on the other's toes. The example patron used is Azi Dahaka, and the player or judge will have to do some work to determine specifics for other patrons.

Magic Object: “The” Magic Sword: Gabriel García-Soto supplies a non-standard DCC magical weapon that one could easily see appearing in an Appendix N novel or story.

Magic Object: Lamprey Scabbard: Author José Manuel Sánchez García provides a sort of cursed item that is really a creature from a parallel plane of existence.

Magic Object: The Scarezombie: "In the most remote and isolated rural communities, where saint men are rare and every stranger is looked upon with suspicion, peasants turn to desperate measures in order to avoid the most horrible of plagues: the undead." Written by Rodrigo García Carmona.

Animals: If there were no other articles in The Phlogiston Books Volume 1, this article would still be well worth buying it for. It looks at a method for detailing wild animals using deed dice to represent the special attacks normally associated with that animal type. Frankly, it is a brilliant idea. It also differentiates between normal animals and the "sole and extraordinary animal that terrorizes the region".

Superstition: An article by José Manuel Sánchez García (with Sergio Martínez contributing wrote St. Hermenegildo’s knuckle), discussing the use of superstition in Dungeon Crawl Classics. Examples of Amulets, Relics, and Images and writings are supplied. I found it hard to grasp the author's intent initially, which may be because of the translation, or may be because I am thick, but once you get it, it is elegant.

Transplanar Climatology: This is a d24 chart of strange events that can take place when travelling between the planes. The author is Gabriel Ciprés. Some are actually arcane cosmic weather; some are not. Seven "Available destinations for a planar trip" are also included, in case your planar travelers get lost.

Disturbing Rural Encounters: Author Nacho Sevilla provides 14 things that may happen in a rural setting, which the players may find somewhat disquieting.

Names for Cults! Or Other Weird Organizations: This is a d24 table with four columns, offering more potential cult names than you will probably need. Author Chris Fazio's work can be used to supply a cult name in a pinch, or for inspiration!

Beaten copper: Finally, this volume ends with a 0-level adventure by Gabriel García-Soto.

Aniceto, the coppersmith, should have returned by now from his trip to Shadypass, the village where he usually travels to sell his wares and restock on copper, the same copper he uses to craft his pots and pans. Sadly, there’s been an accident in the mine, and there’s a shortage of copper. Desperate, Aniceto decided to get his copper from an alternate source. On his way back to Humiliatown, the coppersmith recalled a childhood memory about a wishing well said to be cursed.

Guess who gets to go look for him?

So sharpen your sword and memorize your spells, 'cause otherwise you could end up dead, or even worse: hanging from the gallows tree.

Or Get It Here in Spanish!