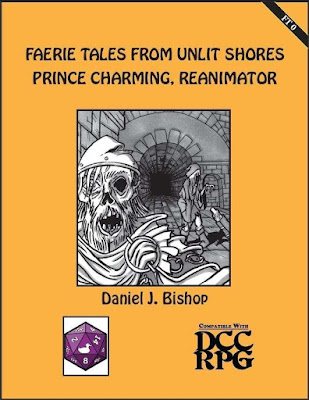 FT0: Prince Charming, Reanimator is a 0-level funnel adventure written by Daniel J. Bishop. Art is by Luigi Catellani, and cartography is by Kristian Richards. The publisher is Purple Duck Games.

This product comes about due to the confluence of several factors.

First, I had planned to do a series of fairy tale-based adventures for the Dungeon Crawl Classics RPG, titled Faerie Tales from Unlit Shores. The idea was to combine classic fairy tales with one or more strong Appendix N influences, to create something that accentuated the folkloric (and often dark) fey elements of the original tale and the adventurous energy of Appendix N fiction.

Second, my good friend Raechel Henderson, who was the first person to ever pay me for a piece of writing, had a Kickstarter project that was moving slowly. I asked my readers to help spread the word about Raechel’s project, in return for which I would write a free adventure. Her project, Spellbound and Spindles, was related to fairy tales too, making this a perfect tribute to those who contributed either with dollars or links. Although Spellbound is no more, it pleases me to no end that Raechel Henderson not only achieved her goal, but fulfilled her commitments, releasing seven issues before Spellbound closed its doors. Perhaps, like Sleeping Beauty herself, Spellbound will reawaken at some future date? Our community should all wish for a strong introduction to fantasy specifically made for children.

The adventure includes Dr. Chapman as a patron, using the abbreviated format from the core rulebook (invoke patron results only). For a more complete write-up, see FT 1: Creeping Beauties of the Wood.

Get It Here, or Get the PWYW Pdf Here!
Posted by ravencrowking at 13:03