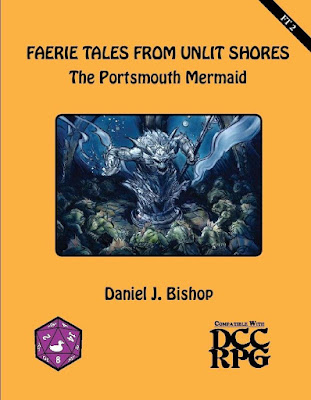 FT 2: The Portsmouth Mermaid is a 2nd level adventure written by Daniel J. Bishop, with art by Matt Morrow (cover) and Luigi Castellani. Cartography is by Kristian Richards. Additional writing by Godric McKellan and Bobby Ree. The publisher is Purple Duck Games.

An invitation to a wedding, and a patron's desire for a mermaid's tears, bring the PCs to Portsmouth, an amalgamated not to H.P. Lovecraft's fictional towns of Kingsport and Innsmouth. In particular, judges would be well advised to read The Festival, Dagon, and The Shadow over Innsmouth if they are interested in direct influences.

The Little Mermaid, by Hans Christian Andersen, is another obvious inspiration. So much so that I am left wondering whether or not Lovecraft had considered this tale when penning Dagon.

There are a great many other fairy tale and nursery rhyme references in the adventure. The Golden River, it may be noted, relates to The King of the Golden River (by John Ruskin), and is also connected to Bone Hoard of the Dancing Horror through the "The Steadfast Tin Soldier" encounter in Appendix C: Additional Encounters.

Appendix A is compiled statblocks for everything referenced in the adventure. There are a lot of elements that can be in play, so this is worth printing out and keeping handy.

Appendix B is New Magic Items. In August of 2014 I ran The Scrimshaw Rod contest on my blog, and decided to split the difference, declaring both contestants (Godric McKellan and Bobby Ree) winners. These items were created by them, and they should have been credited in the text.

Appendix C contains Additional Encounters that can be used to liven up adventuring in Portsmouth, either during this adventure or later in a campaign. They are The Dancing Shoes, The Steadfast Tin Soldier, The Match Girl, I Do Not Like Thee Doctor Fell, The Sky is Falling, The King of the Cats, and Simple Simon's Catch.

Appendix D: The Esoteric Order of Dagon contains a complete patron write-up for Dagon, which can also be found reprinted in  Angels, Daemons, & Beings Between: Extended, Otherworldly Edition. (In fact, there is a Dagon cover.)

Appendix E: Faerie Animal Types for Portsmouth supplies a table for faerie animal characters, using the rules in Creeping Beauties of the Wood, but which are more suitable for the Portsmouth area.

This is the third item in the Faerie Tales from Unlit Shores series. Additional supporting materials can be found in Crawl! fanzine #11 (The Deep Elders) and Three Nights in Portsmouth.

The Portsmouth Mermaid takes place over the twelve days of a Yuletide Celebration in the town of Portsmouth, north of Westlake. The adventure is largely political, with several factions, all of which have a different optimal outcome. The PCs have to figure out what is going on, decide what to do about it, and then live with the consequences.