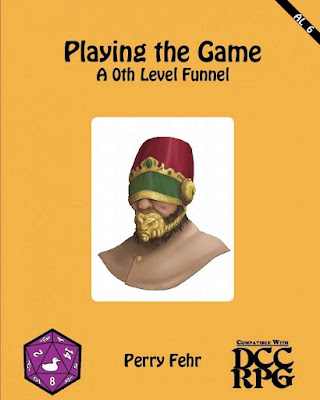 AL 6: Playing the Game is a 0-level funnel adventure by Perry Fehr, with art by Gary Dupuis (including cover and game board design) and Jacob Blackmon. The publisher is Purple Duck Games.

Disclosure: I have a playtest credit in this product.

Playing the Game relates to the Zenik Order, and is therefore linked to the author's The Elemental Lords Awaken! In this adventure, characters are given the chance to play a board game called Arbakampsi, with stakes that are far greater than most game players experience.

Arbakampsi is a board game common to the Lands of Porphyra. It was first described in Purple Duck Storeroom: Arbakampsi, for the Pathfinder system.

In many ways, this adventure reminded me of the Star Trek: Deep Space Nine episode, Move Along Home. Essentially, our hapless characters become part of the game, and, unlike in Deep Space Nine, failure has real consequences.

There is some discussion of using this adventure not as a funnel, but as part of a "larger adventure location for higher level characters". Four specific scenario ideas are provided.

The adventure also includes complete rules for Arbakampsi, including a printable game board, so that the game can become an artifact of your campaign milieu.

This adventure was a lot of fun to playtest. Because of its "game" nature, there are several points at which player intelligence, rather than character abilities, determine success or failure.

What dirty peasant hasn't wanted to turn his grubby copper into a shiny gold coin? The oddly-dressed stranger offered a friendly game, a tempting wager, what was the harm? But harm is definitely in the air when a pack of rubes stumble upon an extradimensional test of elemental loyalty!  Can you make it through the tests of skill, arms and wits to achieve the Ultimate Prize?