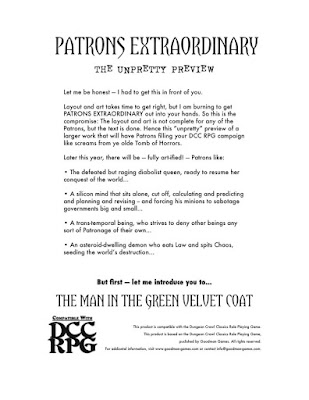 Patrons Extraordinary: The Unpretty Preview was written and illustrated by bygrinstow, whom some may know better as Jon Wilson of Appendix M fame. It is published by Inner Ham.

Patrons Extraordinary: The Unpretty Preview was intended as "an advance peek at a forthcoming set of Patrons for the Dungeon Crawl Classics RPG". It contains an excellent full patron write-up for The Man in the Green Velvet Coat, with a discussion of the Dark Side of Faerie, the Faerie Realm and Elfland, and even Encounters During Faerie Path Travel. The author considers what happens when you try to forsake this patron, and how using this patron can add to your campaign.

In short, this is one of the best patron write-ups I have seen, and it saddens me that a full Patrons Extraordinary did not turn up later in 2015...or at all, at the time of this writing. As this is available as a watermarked pdf for only $1.00, I encourage you to make the purchase in hopes that the author will return to this project! Other patrons we are still waiting to see include:


A petite, jolly figure, full of humor and mirth, The Man in The Green Velvet Coat (or for simplicity, merely “The Man”) is looking for a new pet. Any mortal will suit him, but he prefers Wizards since they make play more fun.

The Man can offer the Wizard access to the strangeness and power of The Faerie Realm. In exchange, he expects his pet to be obedient and loyal, and accompany him every night to events and on travels in the bizarre Faerie Realm. But these events are punishing upon the mortal pet, threatening death by persistent physical exhaustion.

The Man In The Green Velvet Coat at first seems to be whimsical and flighty, and continues to seem that way to those who catch glimpses of him or cross paths with him for brief encounters. But for those who are attached to him, The Man quickly becomes a most wicked and twisted form of cruel and unusual punishment suffered in exchange for personal power.